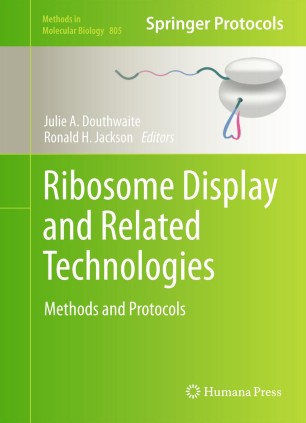 Display technologies have become a very powerful way of generating therapeutic lead molecules and specific reagents for increasing our understanding of biology; however, despite being first described shortly after phage display, the use of ribosome display and related methods have been much less widespread.  Since this is in part due to the complexity of the methods, Ribosome Display and Related Technologies: Methods and Protocols seeks to extend their use by collecting expert contributions describing these detailed protocols.  The protocols described range from well-established methods that have been used for a decade to generate high affinity antibodies, which are already in the clinic, to methods that are in their early stages of application such as display of peptides incorporating non-canonical amino acids.  Written in the highly successful Methods in Molecular Biology™ series format, chapters include introductions to their respective topics, lists of the necessary materials and reagents, step-by-step, readily reproducible laboratory protocols, and tips on troubleshooting and avoiding known pitfalls.