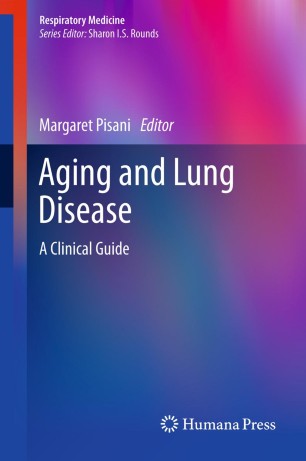 People age 65 and older are the fastest growing segment of the U.S. population.  In the 2010 census 16% of the population, 50 million people, were age 65 and older.  That number is projected to increase to 66 million by the year 2050.  Life expectancy has also increased, with recent CDC reports indicating life expectancy at 77.9 years.  Age-adjusted death rates have decreased significantly with the largest changes occurring in older patients.  Despite these trends, the 10 leading causes of death include several pulmonary etiologies including lung cancer, chronic respiratory diseases, influenza and pneumonia.

Aging and Lung Disease: A Clinical Guide  is devoted to understanding the impact of respiratory diseases in older patients.  It includes reviews of physiology of the aging lung, allergy and immunology of the aging, as well as sleep changes over the life cycle.  There are also comprehensive reviews on specific disease topics including chronic obstructive lung disease, lung cancer, atypical mycobacteria, interstitial lung disease, pulmonary hypertension, pulmonary embolism, obstructive sleep apnea, and sleep disorders in older patients.  Two chapters focus on unique issues in older patients; HIV and lung transplant. Included also are important chapters on assessing functional and cognitive status and end-of-life issues in older patients with lung disease.  In addition to outlining the current state of knowledge, each chapter focuses on special considerations when caring for older patients.  Of particular interest to pulmonologists, internists, and gerontologists, other readers, such as pulmonary and geriatric nurse practitioners, as well as clinical researchers interested in both pulmonary and aging issues, will find Aging and Lung Disease: A Clinical Guide to be a vital resource for improving their care of older patients with lung disorders.