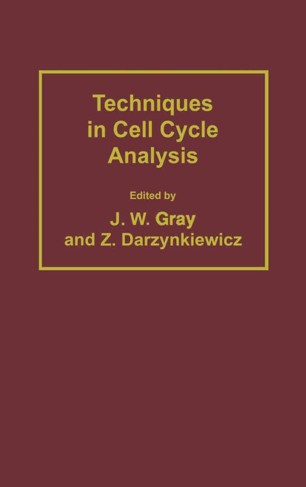 Quantification of the proliferative characteristics of normal and malignant cells has been of interest to oncolo­ gists and cancer biologists for almost three decades. This interest stems from (a) the fact that cancer is a disease of uncontrolled proliferation, (b) the finding that many of the commonly used anticancer agents are preferentially toxic to cells that are actively proliferating, and (c) the observa­ tion that significant differences in proliferation characteristics exist between normal and malignant cells. Initially, cell cycle analysis was pursued enthusiastically in the hope of gener­ ating information useful for the development of rational cancer therapy strategies; for example, by allowing identi­ fication of rapidly proliferating tumors against which cell cycle-specific agents could be used with maximum effec­ tiveness and by allowing rational scheduling of cell cyc- specific therapeutic agents to maximize the therapeutic ratio. Unfortunately, several difficulties have prevented realiza­ tion of the early promise of cell cycle analysis: Proliferative patterns of the normal and malignant tissues have been found to be substantially more complex than originally an­ ticipated, and synchronization of human tumors has proved remarkably difficult. Human tumors of the same type have proved highly variable, and the cytokinetic tools available for cell cycle analysis have been labor intensive, as well as somewhat subjective and in many cases inapplicable to humans. However, the potential for substantially improved cancer therapy remains if more accurate cytokinetic infor­ mation about human malignancies and normal tissues can be obtained in a timely fashion.