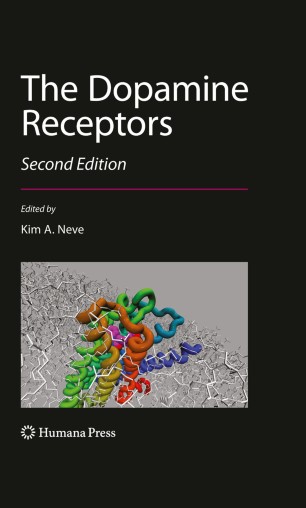 Part of the The Receptors book series (REC)

Dopamine receptors are among the most validated drug targets for neuropsychiatric disorders such as schizophrenia and Parkinson’s disease, and are potential targets for other disorders such as substance abuse, depression, Tourette’s syndrome, and attention deficit hyperactivity disorder. The new knowledge brought from the creation and characterization of mice deficient in each of the subtypes and the development of increasingly subtype-selective agonists and antagonists has fueled many of the chapters new to this second edition, with the use of knock-out mice and subtype-selective drugs meriting discussion in stand-alone chapters. The field of G protein-coupled receptors has also advanced significantly since the first edition, with a model of GPCR signaling based on linear, compartmentalized pathways having been replaced by a more complex, richer model in which neurotransmitter effects are mediated by a signalplex composed of numerous signaling proteins, including multiple GPCRs, other types of receptors, such as ionotropic receptors, accessory and scaffolding proteins, and effectors. This second edition of Dopamine Receptors will be of interest to neurobiologists, pharmacologists and molecular biologists who study the brain, as well as neurologists working on psychiatric diseases.

...extremely well-written and thoroughly referenced... All neuroscientists searching for an invaluable reference which provides a clearer understanding of the dopamine field and its future direction should have this book at their fingertips. -Journal of Medicinal Chemistry
Buy options