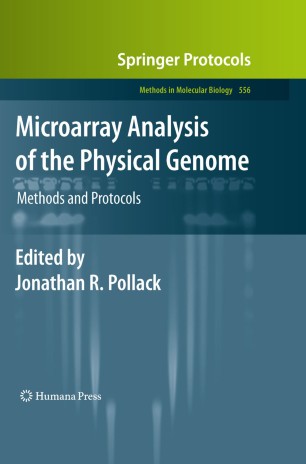 Microarray Analysis of the Physical Genome

In the early years of microarray technology, efforts were directed mainly at profiling expressed genes, while recently the microarray platform has been adapted into diverse applications directed toward the investigation of the physical genome. In Microarray Analysis of the Physical Genome: Methods and Protocols, experts in the field cover DNA microarray applications for the detection and characterization of genomic DNA-associated copy number alteration, loss of heterozygosity (LOH), cytosine methylation, protein binding sites, regulatory elements, and replication timing, with an emphasis on higher eukaryote (animal) and cancer genomes. Written in the highly successful Methods in Molecular Biology™ series format, chapters include a brief introduction to their respective subjects, lists of the necessary materials and reagents, step-by-step protocols, and time-saving notes on troubleshooting and avoiding known pitfalls.

Authoritative and easy-to-use, Microarray Analysis of the Physical Genome: Methods and Protocols is of great value to the molecular biologist or computational biologist interested in understanding the principles of these analyses or in planning future experiments using microarrays to characterize the physical genome.