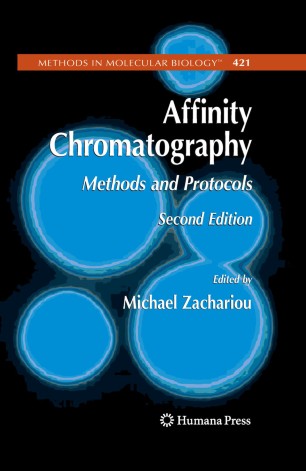 Thirty-eight years after its introduction, affinity chromatography remains a key tool in the armory of separation techniques available to separation and interaction scientists. Expanded and updated from the first edition, Affinity Chromatography: Methods and Protocols, Second Edition, provides the beginner with the practical knowledge needed to develop affinity separations suitable for a variety of applications relevant to the post-genomic era. This second edition expands on the first edition by introducing more state-of-the-art protocols used in affinity chromatography. This new edition also describes protocols that demonstrate the concept of affinity chromatography being applied to meet the modern high throughput screening demands of researchers and development scientists whilst expanding on some more traditional affinity chromatography approaches that have become of greater interest to separation scientists. Chapters in this cutting-edge text expand on affinity chromatography techniques that currently enjoy frequent citation in the literature from those purifying biomolecules. Other chapters include protocols describing the use of a variety of fusion tags as well as how to cleave them, so as to allow the scientists to study the native phenotype of the protein. Renowned researchers also include protocols detailing diverse applications of affinity chromatography such as its use in catalytic reactions, DNA purification, whole cell separations and for the isolation of phosphorylated proteins. Affinity Chromatography: Methods and Protocols, Second Edition, is an essential reference for those interested in separation sciences, particularly in the pharmaceutical and biological research sectors, that have an interest in isolating macromolecules rapidly, quantitatively, and with high purity.

"The book consists of three parts including 21 chapters that have been written by a large group of authors from many countries. … recommends this book as a manual for many specialists involved in purification of biomolecules in various fields of biochemistry, molecular biology, biotechnology, and bioorganic chemistry. The book can also be recommended as a handbook for university students and their teachers as well as for other schools preparing specialists in the above-mentioned fields." (G. Ya. Wiederschain, Biochemistry, November, 2008)