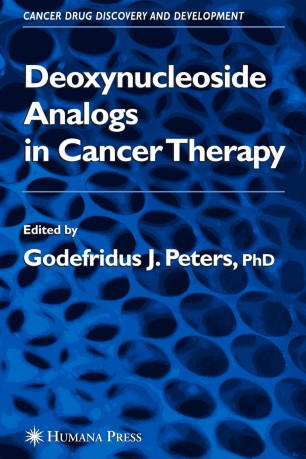 Emerging as an important new volume in the renowned Cancer Drug Discovery and Development™ series, Deoxynucleoside Analogs in Cancer Therapy expertly summarizes the current status of development and application of deoxynucleoside analogs. Authoritative up-to-date reviews are presented by scientists well known in their specific areas and all contributions include valuable sound advice on structure and topics.
Organized into several sections, the first part covers general aspects of drug uptake and metabolism and explains how novel technology has enabled a rapid expansion of this field. The second part is concerned with a number of specific drugs including cytarabine, gemcitabine, troxacitabine, clofarabine and Ara-G. The final section covers pharmacokinetics, prodrugs, and specific applications such as radiosensitization, gene therapy, and the use of deoxynucleoside analogs as tracers.
Throughout Deoxynucleoside Analogs in Cancer Therapy, the focus is on novel aspects of deoxynucleoside analogs in the clinical context, as well as on unexpected targets of these compounds, such as their specific activity against cell cycle-dependent kinases or oncogenes. The wealth of information presented here can be used to design rational combinations aimed at inhibiting various cellular signaling pathways, or combining inhibition of various targets. Deoxynucleoside Analogs in Cancer Therapy has been designed specifically to facilitate such an interaction between various fields.