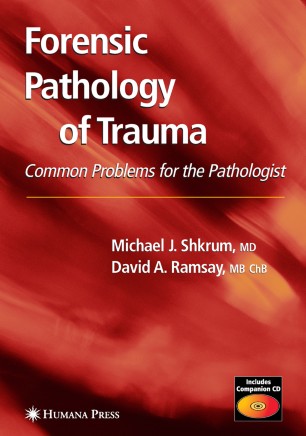 Common Problems for the Pathologist

Part of the Forensic Science and Medicine book series (FSM)

The practice of forensic pathology includes the collection and analysis of evidence in relation to a corpse in order to establish the cause of death. Knowledge of the cause of death contributes to the determination of the manner of death by medical examiners and coroners, who are occasionally assisted by law enforcement officers. In the process of establishing the cause and manner of death, representatives of various investigative bodies have several responsibilities, including explaining the death to family members, attempting to reduce the risk of similar deaths in the future, and, if applicable, apprehending the individuals who are responsible for the death. The most well-known and popular role of a forensic pathologist is in the inves- gation of cases of suspicious death; however, most medicolegal autopsies involve unexpected deaths that are above suspicion, many of which are caused by trauma (trauma being defined as any physical force or agent that causes bodily harm). The purpose of Forensic Pathology of Trauma: Common Problems for the Pathologist is to provide practical advice and information about the conduct of the forensic autopsy in cases of trauma, and to offer guidance about the analysis of the autopsy findings in these cases.