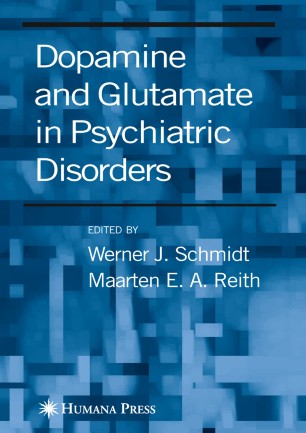 Dopamine and Glutamate in Psychiatric Disorders

Continous rigorous research in basic neurosciences and in clinical studies has enormously increased our knowledge of the neurobiological basis of mental functions and of the neuronal dysfunctions underlying such diseases as schizophrenia, depression, attention deficit disorder, and Parkinson's disease. A transmitter system does not work in isolation, it interacts with other transmitters and the balance between several transmitter determines the outcome, either physiological or pathological. Such a critical balance exists between dopamine and glutamate, which in many brain areas play functionally opposing roles. In Dopamine and Glutamate in Psychiatric Disorders, a panel of neurochemists, pharmacologists, experimental psychologists, and clinicians summarizes our current understanding of the interactive role of dopamine and glutamate in psychiatric diseases and from that develops novel therapeutic strategies and possibilities for the future. Among the new ideas presented are hypotheses on the role of dopamine and glutamate in aggression, the glutamate system in anxiety disorders, glutamate and neurodegeneration, on the origin, progression, and cognitive aspects of Parkinson's disease. Additional chapters offer illuminating insights into a variety of psychiatric diseases, including attention deficit hyperactivity disorder, stress, aggression, addiction, schizophrenia, depression, social phobias, dementias, bulimia, and neurodegenerative diseases like Parkinson's and Alzheimer's diseases. Each chapter summarizes the prevalence and symptoms of the disease and explains the involvement of dopamine and/or glutamate systems using the newer molecular approaches such as transgenic knockout or knockin mice and recent brain imaging techniques. The authors also offer a critical selection and evaluation of relevant literature and a description of future directions for new therapy development.
Path-breaking and insightful, Dopamine and Glutamate in Psychiatric Disorders offers behavioral pharmacologists, neurobiologists, and clinicians an enlightening review of the neurobiological basis and treatment strategies of today's most important psychiatric and neurological diseases.

"...offers an excellent review of our understanding of how dopamine and glutamate influence the pathophysiology of psychiatric disease...an impressive effort, and every psychiatrist (and neurologist) should have this book in their reference library." - 4 Stars, Doody's Health Sciences and Book Review Journal
Buy options