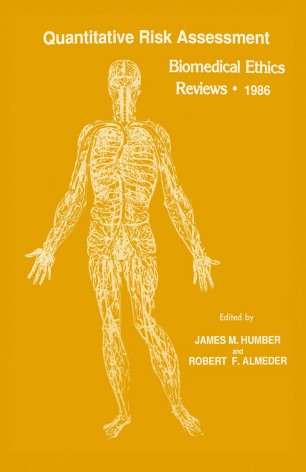 The National Science Foundation, The National Institute of Occupational Safety and Health, and the Center for Technology and Humanities at Georgia State University sponsored a two-day national conference on Moral Issues and Public Policy Issues in the Use of the Method of Quantitative Risk Assessment ( QRA) on September 26 and 27, 1985, in Atlanta, Georgia. The purpose of the conference was to promote discussion among practicing risk assessors, senior government health officials extensively involved in the practice of QRA, and moral philosophers familiar with the method. The conference was motivated by the disturbing fact that distinguished scientists ostensibly employing the same method of quantitative risk assessment to the same substances conclude to widely varying and mutually exclusive assessments of safety, depending on which of the various assumptions they employ when using the method. In short, the conference was motivated by widespread concern over the fact that QRA often yields results that are quite controversial and frequently contested by some who, in professedly using the same method, manage to arrive at significantly different estimates of risk.