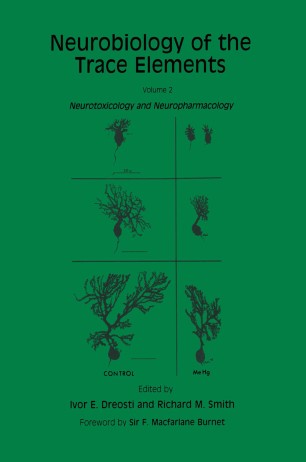 Neurobiology of the Trace Elements

F. Macfarlane Burnet I have been an interested onlooker for many years at research on the biology of trace elements, particularly in its bearing on the pas­ toral and agricultural importance of copper, zinc, cobalt, and mo­ lybdenum deficiencies in the soil of various parts of Australia. More recently I have developed a rather more specific interest in the role of zinc, particularly in relation to the dominance of zinc metalloenzymes in the processes of DNA replication and repair, and its possible significance for human pathology. One area of special significance is the striking effect of zinc deficiency in the mother in producing congenital abnormalities in the fetus. The fact that several chapters in the present work are concerned with this and other aspects of zinc deficiency is, I fancy, the editors jus­ tification for inviting me to write this foreword. In reading several of the chpaters before publication, my main impression was of the great potential importance of the topic of trace metal biology in both its negative and positive aspects-the effects of deficiency of essential elements and the toxicity of such pollutants of the modern world as lead or mercury mainly as or­ ganic compounds.