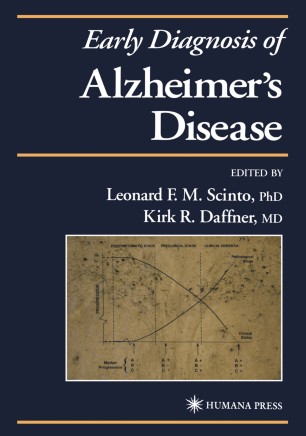 "This volume on the early diagnosis of Alzheimer's disease is both timely and compelling. It offers contributions from a superb group of experts who have helped define the relevant issues and led critical clinical and scientific advances in early-stage diagnosis. The first three chapters justify the importance of accurate diagnosis and describe the clinical and pathological phenotypes for early-stage Alzheimer's disease. . . The Editors are to be commended for the extraordinarily high quality of the contributing authors and for focusing attention on the topic of early-stage Alzheimer's disease. . . the early diagnosis of Alzheimer's disease will become a dominant issue for clinicians, patients, and their families as new therapies are developed and new research discoveries occur. This volume not only serves as a testimonial to the value of early diagnosis, but provides clinicians and scientists with the basis to appreciate ongoing developments in this emerging and important field." -Foreword by John C. Morris, MD, Professor of Neurology, Washington University School of Medicine

"The editors and authors of this book have produced an important, timely and accessible review of developments in early diagnosis. They rightly highlight the increasing focus on the idea that mild cognitive impairment, previously thought to be caused by a normal sign of aging , may actually be a sign of incipient or very mild AD. The contributors all stress the practical implications of the evidence and data they review...with both practical clinical advice, plus detailed and referenced discussion of the research to date, this book should prove invaluable to physicians and scientists alike."- Pathways: The Novartis Journal

"This volume is a valuable resource essentially for the clinicians (neurologists, neuropsychiatrists, neurogeriatrists) and the scientists whose principal interest is Alzheimer's disease (AD)....contains the contributions of excellent experts with the aim to introduce a detailed, extensive but nonredundant summary regarding methods and results of research on the early stages of AD....The reading is easy an d the aspects of early diagnosis are treated with a coherent and unitary method....I highly recommend this book as a most valuable and unitary reference regarding the actual knowledge of early diagnosis of AD."- European Neurology

"The book's value as a single volume is carried by the diversity of material covered and the compendium of references for each chapter, all taken from the point of view of the importance of early diagnosis." - Journal of the International Neuropsychological Society

"...this is a text which is uniformly well-written, ably edited by Leonard Scinto and Kirk Daffner and will certainly be frequently dipped into by researchers. I recommend it for university libraries and for researchers in this area." - International Journal of Geriatric Psychiatry

"The text is authoritative, extremely well-referenced and I really think it is geared towards researchers in the field. I learnt a tremendous amount from reading this text...I recommend it for university libraries and for researchers in this area." -International Journal of Geriatric Psychiatry
Buy options