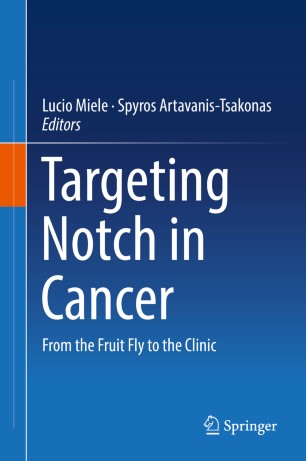 From the Fruit Fly to the Clinic

The serendipitously discovered link between developmental biology and cancer, touched of an explosion of discoveries on the role of Notch in human malignancies, including every aspect of cancer biology, from control of differentiation, proliferation and apoptosis in transformed cells to angiogenesis, tumor-stroma interaction and anti-cancer immune responses. A number of observations have revealed that Notch even plays a role in the renewal of cancer stem cells and tumor initiating cells, which are thought to be a major cause of resistance to treatment. Targeting Notch in Cancer will provide researchers, oncologists, pharmacologists and students with a detailed understanding of the intricate cross-talk between Notch and other pathways of therapeutic interest so to better design rational drug combinations for specific diseases and disease subsets.

Divided into two parts, Part I describes in detail what we know about the genetics, molecular biology, biochemistry and structural biology of Notch, as well as the role of Notch in such processes as angiogenesis and immune surveillance. Without insights gained from these basic studies, rational targeting of Notch in human disease would be impossible. Part II describes the role of Notch and ongoing experimental therapeutic efforts in the most important subtypes of human cancers, organized in a clinically oriented fashion by organs and systems affected

Dr. Miele is the Cancer Crusaders Professor of Cancer Research and Chair of the Department of Genetics, School of Medicine, at the Louisiana State University Health Sciences Center, New Orleans, Louisiana. Dr. Miele completed his M.D. and Ph.D. degrees summa cum laude at the University of Naples, Italy, in 1982 and 1987 respectively. His Ph.D. dissertation work was conducted at the Max-Planck Institute for Molecular Genetics, Berlin, Germany. After a postdoctoral fellowship and at the National Institutes of Health in the Human Genetics Branch, Section on Developmental Genetics, Dr. Miele started his independent research career in 1993 at the Center for Biologics Evaluation and Research, U.S. Food and Drug Administration. There, he took on a project on the then recently discovered human NOTCH gene. His research has been focused on Notch signaling in cancer for the past 25 years, with a mechanistic and translational emphasis. In 1998, Dr. Miele moved to Loyola University's Cardinal Bernardin Cancer Center, where he discovered the anti-apoptotic activity of Notch1 in leukemia cells. In 2001, Dr. Miele moved to the University of Illinois at Chicago, as Program Director in the Cancer Center and Associate Professor of Biopharmaceutical Sciences. At UIC, Dr. Miele determined that Notch1 is necessary for Ras-induced transformation of human cells and is expressed in breast cancer. In 2005, he returned to Loyola, as a Full Professor, Breast Cancer Program Director and eventually, Associate Cancer Center Director for Translational Sciences. There, he made the observation that endocrine therapy in breast cancer cells results in re-activation of Notch signaling, and simultaneous inhibition of Notch and estrogen signaling can eradicate estrogen receptor-positive breast cancer stem cells. This led to two successful clinical trials of endocrine therapy/gamma secretase inhibitor combinations. In 2009, Dr. Miele was named Director of the University of Mississippi Cancer Institute and Ergon Professor of Medicine. He held that post until his move to LSUHSC in 2014. His current work focuses on the role of Notch1 in regulating mitochondrial metabolism in triple-negative breast cancer, the role of Notch4 in endocrine-resistant estrogen-receptor positive breast cancer, the role of Notch1 in anti-tumor CD8 T cell responses and the targeting of Notch ligand Jagged in cancer immunotherapy. Additionally, Dr. Miele’s group is exploring novel approaches to selective targeting of Notch in breast cancer. Dr. Miele has authored over 220 peer-reviewed publications in biomedical journals to date. He regularly chairs or serves on scientific grant review panels for NIH, NCI, NCATS, the DOD and research funding agencies from Canada, the UK, Spain, Italy, The Netherlands and Singapore. He serves as Editor or Associate Editor of a number of biomedical journals, and has consulted for several pharmaceutical and biotechnology companies regarding Notch-targeting strategies.

Dr. Artavanis-Tsakonas is a molecular biologist and developmental geneticist. He did his undergraduate studies at the ETH in Zurich and earned a MSc in Chemistry and has a PhD from Cambridge University, for work carried out at the MRC Laboratory of Molecular Biology. After his postdoctoral work at the Biozentrum in Basel and at Stanford University, he joined the Yale faculty in 1982. He rose to Professor at the Department of Biology and Professor at the Department of Cell Biology at the Yale School of Medicine and also served as the Director of the Biological Sciences Division at Yale. He was a Howard Hughes Medical Institute Investigator from 1987 to 1998 when he left for Harvard.  In 1999 was elected Professor at the Collège de France, in Paris holding the Chair of Biology and Genetics of Development until 2012 when he became Professeur honoraire. He is the Founding Director of the Department of Genetics and Developmental Biology at Institute Curie, Paris, 2007-2009.

In 1998 he joined the Cell Biology Department at the Harvard Medical School where he is now Professor Emeritus and from1999-2007 was also the Isselbacher-Schwartz Professor, Massachusetts General Hospital Cancer Center.  From 2012 to March 2017 he was the Chief Scientific Officer for Biogen. He is the founding Director of the Developmental and Regenerative Biology Program at Harvard Medical School.

His laboratory has been, for many years, utilizing model organisms to define critical targets and pathways important in development and disease and pioneered the use of genetic and molecular approaches to define and analyze the Notch signaling pathway. Currently, at his Harvard Medical School laboratory, he is using genetic tools to dissect neurodegeneration pathways related to human disease and is completing work defining the Drosophila Proteome.

He is a fellow of the American Academy of Arts and Sciences, an associate member of EMBO and a corresponding member of the Athens Academy.  In addition to his academic credentials, Dr. Artavanis-Tsakonas is a co‑founder of Exelixis, Cellzome, and Anadys, and is the president and co-founder of the philanthropic organization Fondation Santé.