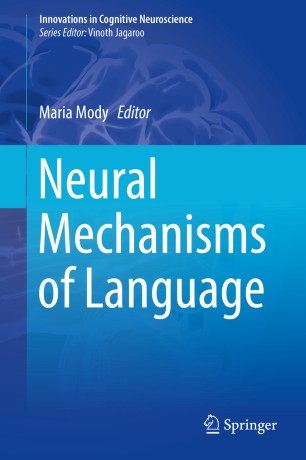 This important volume brings together significant findings on the neural bases of spoken language –its processing, use, and organization, including its phylogenetic roots. Employing a potent mix of conceptual and neuroimaging-based approaches, contributors delve deeply into specialized structures of the speech system, locating sensory and cognitive mechanisms involved in listening and comprehension, grasping meanings and storing memories. The novel perspectives revise familiar models by tracing linguistic interactions within and between neural systems, homing in on the brain’s semantic network, exploring the neuroscience behind bilingualism and multilingual fluency, and even making a compelling case for a more nuanced participation of the motor system in speech. From these advances, readers have a more three-dimensional picture of the brain—its functional epicenters, its connections, and the whole—as the seat of language in both wellness and disorders.

Included in the topics:

·         The interaction between storage and computation in morphosyntactic processing.

·         The role of language in structure-dependent cognition.

·         Causal modeling: methods and their application to speech and language.

Maria Mody, Ph.D. is an assistant professor of radiology at Harvard Medical School and Principal Investigator of the Developmental Language and Reading Research Laboratory in the Athinoula A. Martinos Center for Biomedical Imaging at Massachusetts General Hospital, Boston. Her research focuses on the neural bases of impaired speech, language and reading in children with developmental disorders including autism and dyslexia. Using MEG, fMRI, and DTI, her lab investigates speech perception and speech production and the impact of impairment in these processes on spoken and written language as evident in brain circuits. Dr. Mody has authored or co-authored numerous research articles and is co-editor of Brain, Behavior, and Learning in Language and Reading Disorders (Guilford, 2008).