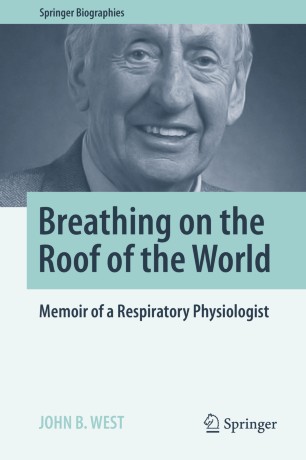 Breathing on the Roof of the World

Memoir of a Respiratory Physiologist

This book is an informal autobiography by John West MD PhD. He obtained his medical degree in Adelaide, Australia and then spent 15 years mainly at the Royal Postgraduate Medical School, Hammersmith Hospital in London where he, with others, used radioactive oxygen-15 to make the first description of the uneven regional distribution of blood flow in the lung.

In 1960-1961, he was a member of the Himalayan Scientific and Mountaineering Expedition led by Sir Edmund Hillary who had made the first ascent of Mt Everest 7 years before. During the expedition about 6 scientists spent up to three months at an altitude of 5800 m studying the effects of this very high altitude on human physiology.

Because of his interests in the effects of gravity on the lung, Dr. West spent a year at the NASA Ames Research Center in Mountain View, California in 1967-1968. While there he submitted a proposal to NASA to measure pulmonary function of astronauts in space, and this was funded. Later, in 1981 he organized the American Medical Research Expedition to Everest during which the first measurements of human physiology on the summit, altitude 8848 m, were obtained. In the 1990’s, Dr. West’s team made the first comprehensive measurements of pulmonary function of astronauts in space using SpaceLab which was taken up in the Shuttle.

Dr. West's research interests are broad with an emphasis on the physiology of pulmonary gas exchange. He has also worked on the bird lung, pulmonary bleeding in racehorses, and the effects of snorkeling in elephants. His honors include membership of the National Academy of Medicine and the American Academy of Arts and Sciences, and he has received honorary doctorates from universities in Athens, Barcelona and Ferrara.