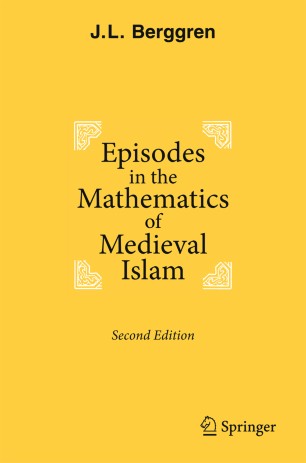 Episodes in the Mathematics of Medieval Islam

This book presents an account of selected topics from key mathematical works of medieval Islam, based on the Arabic texts themselves. Many of these works had a great influence on mathematics in Western Europe. Topics covered in the first edition include arithmetic, algebra, geometry, trigonometry, and numerical approximation; this second edition adds number theory and combinatorics. Additionally, the author has included selections from the western regions of medieval Islam—both North Africa and Spain. The author puts the works into their historical context and includes numerous examples of how mathematics interacted with Islamic society.

“The author gives short reviews of Greek (and Hindu) mathematics that influenced Islamic scholars. … this volume can be highly recommended to everyone looking for an easily accessible introduction to the mathematics of Medieval Islam.” (C. BAXA, Monatshefte für Mathematik, Vol. 187 (4), December, 2018)

“The book remains unique for its breadth and accessibility. The release of a second edition has given the author the opportunity to address two significant omissions from the original. … Students and teachers, even those who have already read the first edition, will be rewarded by another visit.” (Glen Van Brummelen, zbMATH 1376.01001, 2018)

“A very fine book, not only for students of mathematics with a liberal arts interest in the history of their field, but also for those whose primary interest is medieval Islamic culture; here they may find a very accessible introduction to an aspect of this culture which Arabist scholars normally know by name only and whose substance they leave to historians of mathematics.” (Lens H¢yrup, Mathematical Reviews, September, 2017)

“This informative and dynamic book gives historical highlights of Islamic mathematical works from medieval times and their influence on the mathematics of western Europe. … The text will be of interest to both beginning students and readers with a strong mathematical background. Each chapter has its own bibliography–these entries number around 90. Summing Up: Recommended. All readers.” (D. P. Turner, Choice, Vol. 55 (1), September, 2017)
“Berggren’s descriptions of the mathematics in each section are thorough and helpful. He typically situates the work in question in its historical context and explains possible points of confusion as he walks the reader through the steps. … Berggren has done a fine job of updating and expanding his 1985 classic. Now others among us need to begin in writing for a wider audience too.” (Jeffrey A. Oaks, Nazariyat, Vol. 4 (1), 2017)

“Niazi’s book on the great thinker and scientist Qutb al-Dīn al-Shīrāzī (1236-1311) is a welcome and thought-provoking study of a particularly rich period in the history of Islamic science. A short but dense book (153 pages, excluding appendices and bibliography), it covers a wide variety of issues pertaining to Arabic and Persian astronomy during the Ilkhanid period.” (Damien Janos, Nazariyat, Vol. 1 (3), November, 2015)