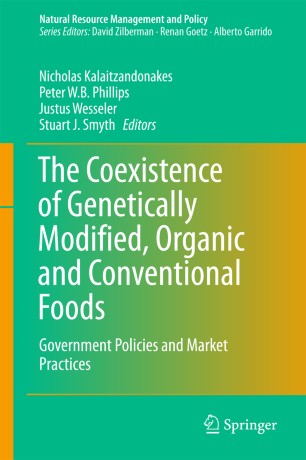 The Coexistence of Genetically Modified, Organic and Conventional Foods

Since their commercial introduction in 1996, genetically modified (GM) crops have been adopted by farmers around the world at impressive rates. In 2011, 180 million hectares of GM crops were cultivated by more than 15 million farmers in 29 countries. In the next decade, global adoption is expected to grow even faster as the research pipeline for new biotech traits and crops has increased almost fourfold in the last few years. The adoption of GM crops has led to increased productivity, while reducing pesticide use and the emissions of agricultural greenhouse gases, leading to broadly distributed economic benefits across the global food supply chain. Despite the rapid uptake of GM crops, the various social and economic benefits as well as the expanding rate innovation, the use of GM crops remains controversial in parts of the world. Despite the emergence of coexistence between GM, organic and conventional crops as a key policy and practical issue of global scale, there is no coherent literature that addresses it directly. Governments and market stakeholders in many countries are grappling with policy alternatives that settle conflicting property rights, minimize negative market externalities and associated liabilities, maximize the economic benefits of innovation and allow producer and consumer choice. This book intends to fill these needs with contributions from the top theoreticians, legal and economic analysts, policy makers and industry practitioners in the field. As the economics and policy of coexistence start to emerge as an separate subfield in agricultural, environmental and  natural resource economics with an increasing number of scholars working on the topic, the book will also provide a comprehensive base in the literature for those entering the area, making it of interest to students, scholars and policy-makers alike.