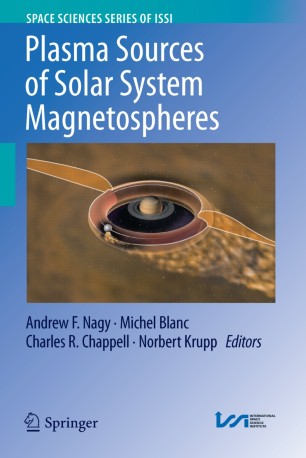 This volume reviews what we know of the corresponding plasma source for each intrinsically magnetized planet. Plasma sources fall essentially in three categories: the solar wind, the ionosphere (both prevalent on Earth), and the satellite-related sources.

Throughout the text, the case of each planet is described, including the characteristics, chemical composition and intensity of each source. The authors also describe how the plasma generated at the source regions is transported to populate the magnetosphere, and how it is later lost. To summarize, the dominant sources are found to be the solar wind and sputtered surface ions at Mercury, the solar wind and ionosphere at Earth (the relative importance of the two being discussed in a specific introductory chapter), Io at Jupiter and – a big surprise of the Cassini findings – Enceladus at Saturn. The situation for Uranus and Neptune, which were investigated by only one fly-by each, is still open and requires further studies and exploration. In the final chapter, the book offers a summary of the little we know of Uranus and Neptune, then summarizes in a comparative way what we know of plasma sources throughout the solar system, and proposes directions for future research.

Professor Andrew F. Nagy received a Diploma in Radio Engineering and an Honors B. E. degree from the University of New South Wales. He completed his graduate education in the U.S., receiving M.S. degrees from the University of Nebraska and the University of Michigan and a Ph. D. from the University of Michigan. He has been on the faculty of the University of Michigan from 1963 to 2012 and is now Professor Emeritus. He has had short term appointments at UCSD, Utah State University and Stanford University. Professor Nagy has over forty years of experience in both theoretical and experimental studies of the upper atmospheres, ionospheres and magnetospheres of the Earth and planets. He was principal and co-investigator of a variety of instruments flown on OGO, Pioneer Venus, Dynamic Explorer etc. He was Interdisciplinary Scientist for the Dynamic Explorer and Pioneer Venus programs. He has also participated, both as an instrument and science collaborator, on the Soviet VEGA and PHOBOS  missions. He is a team member of the Radio Science Investigation on Cassini, and was co-investigator on the Nozomi mission. He has led the development of numerous theoretical models related to planetary atmospheric and ionospheric studies and has been involved in a large variety of data analysis and interpretation studies. He has been the principal or co-author of over 350 papers published in refereed journals; he has also authored/co-authored a number of review papers and encyclopedia chapters and a book on the ionospheres. Professor Nagy has been the chair or member of a large number of Committees and Boards of NASA, NSF, NAS/NRC, AGU, COSPAR, URSI etc. He has also served as Editor of Geophysical Research Letters and Reviews of Geophysics and Space Physics. He was also the President of the Space Physics and Aeronomy Section of AGU. Professor Nagy is a Fellow of the AGU. He is also a member of the Hungarian Academy of Sciences and the International Academy of Astronautics. He won the AGU J. A. Fleming Medal and the William Kaula Award, was the Nicolet Lecturer at AGU and was a winner of the NASA Public Service Medal.

Dr. Michel Blanc graduated from Ecole Polytechnique (1970) and Ecole Nationale Supérieure des Télécommunications (1973), and defended his doctoral thesis in 1980 at Université Paris VI. He started his career in the field of ionospheric research and space physics at the Centre de Recherches en Physique de l'Environnement. In 1988 he was appointed director of the Midi-Pyrénées Observatory in Toulouse. There he has been actively involved in the preparation of several major space programmes, first ESA’s CLUSTER mission, then on the exploration of giant planets: first the Cassini-Huygens mission to Saturn and Titan, for which he has been appointed by NASA Interdisciplinary Scientist, and later the EJSM/Laplace joint ESA-NASA mission to the Jupiter system, for which he served as ESA’s lead scientist. From July 2000 to June 2005, he has been director of the Observatoire Astronomique de Marseille Provence. From august 2007 to February 2012 he has been Vice-president for research of Ecole Polytechnique. Dr. Blanc has been a member of the SSWG of ESA and has chaired for nearly 10 years the Solar system working group of CNES. He has been the chairman of the CERES, the Space Science Committee of CNES, which covers all disciplines from fundamental physics to astrobiology, and a member of the Comité des Programmes Scientifiques (CPS) of CNES. From 2005 to 2012, Dr. Blanc has been the coordinator of the EuroPlanet EU network, a research infrastructure network gathering over 60 planetary science laboratories in 17 EU countries. He is now back at the Observatoire Mid-Pyrénées (IRAP laboratory) in Toulouse where he is working on giant planets magnetospheres, particularly through his involvements in the Cassini and Juno missions, and also serves as Discipline Scientist (in particular for planetary sciences) at ISSI.

In September 1996, Professor Chappell and former NBC Today Show host Jim Hartz joined Vanderbilt as Visiting Professional Scholars to conduct a project examining media coverage of news related to science and technology. The resulting book, "Worlds Apart," was released in March 1998. As Associate Director for Science at NASA's Marshall Space Flight Center (1987-1997), he served as the chief scientist for the center. He has directed research in solar terrestrial physics and has been a principal investigator on several satellite missions. From 1976 to 1985, Professor Chappell was the mission scientist for Spacelab 1, a joint European/American shuttle mission. In December 1985, he was selected to train as an alternate payload specialist crewmember for the space shuttle mission STS-45, which was carried out in March 1992. From 1994 to 1995, Professor Chappell worked with then US Vice President Al Gore to create the K-12 GLOBE science education program. In 1989 he co-founded the Aspen Global Change Institute with John Denver's Windstar Foundation. As a scientist and spokesman for the space program, Professor Chappell has been interviewed on NBC, ABC, CNN and the BBC. He has authored more than 150 published scientific articles.  Professor Chappell is a member of Phi Beta Kappa and the International Academy of Astronautics and has received the NASA Medals for Exceptional Scientific Achievement and Exceptional Service.Dr. Norbert Krupp studied experimental physics at the Kaiserslautern University of Technology in Germany until 1991, followed by a position at the Max Planck Institute for Aeronomy in Germany. He obtained his PhD in 1994 from the Braunschweig University of Technology, analyzing energetic particle data from the EPAC instrument onboard Ulysses during the Jupiter flyby. His career continued with a Postdoc position at the Johns Hopkins University Applied Physics Laboratory in Laurel, MD, USA, where he continued his study of Jupiter’s environment. Since 1996 he has been a staff member of the planetary department at the Max Planck Institute for Solar System Research in Göttingen, Germany, where he is responsible for the data analysis and the design of many particle instruments listed below. His main interest is the study of plasma processes in outer planet’s magnetospheres and their interaction with moons. He has published more than 150 papers in international journals. Dr. Krupp has been and is involved in the following space missions: PI of EPAC/Ulysses; Co-I on EPD(Galileo), MIMI/Cassini, Aspera-3/MarsExpress, Aspera-4/VenusExpress, MPPE/BepiColombo, Serena/BepiColombo, PEP/Juice, JMAG/Juice, SWI/Juice. He is the chair of the Magnetosphere and Plasma science working groups of Cassini and Juice. In addition, Dr. Krupp was a member of the science definition team of EJSM/Laplace (now Juice). In February of 2015 he became a honorary reader of the Mullard Space Science Laboratory/University College London.