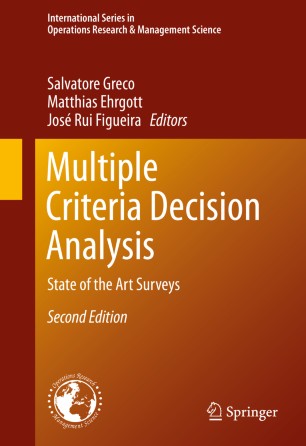 State of the Art Surveys

In two volumes, this new edition presents the state of the art in Multiple Criteria Decision Analysis (MCDA).  Reflecting the explosive growth in the field seen during the last several years, the editors not only present surveys of the foundations of MCDA, but look as well at many new areas and new applications.  Individual chapter authors are among the most prestigious names in MCDA research, and combined their chapters bring the field completely up to date.

Part I of the book considers the history and current state of MCDA, with surveys that cover the early history of MCDA and an overview that discusses the “pre-theoretical” assumptions of MCDA.  Part II then presents the foundations of MCDA, with individual chapters that provide a very exhaustive review of preference modeling, along with a chapter devoted to the axiomatic basis of the different models that multiple criteria preferences.  Part III looks at outranking methods, with three chapters that consider the ELECTRE methods, PROMETHEE methods, and a look at the rich literature of other outranking methods.

Part IV, on Multiattribute Utility and Value Theories (MAUT), presents chapters on the fundamentals of this approach, the very well known UTA methods, the Analytic Hierarchy Process (AHP) and its more recent extension, the Analytic Network Process (ANP), as well as a chapter on MACBETH (Measuring Attractiveness by a Categorical Based Evaluation Technique).  Part V looks at Non-Classical MCDA Approaches, with chapters on risk and uncertainty in MCDA, the decision rule approach to MCDA, the fuzzy integral approach, the verbal decision methods, and a tentative assessment of the role of fuzzy sets in decision analysis.

José Rui Figueira is an Associate Professor at the Technical University of Lisbon, Portugal, and researcher at CEG-IST, Center for Management Studies of Instituto Superior Técnico and LAMSADE, University of Paris-Dauphine, France. He obtained his Ph.D. in Operations Research from University of Paris-Dauphine. Professor Figueira’s current research interests are in decision analysis, integer programming, network flows and multiple criteria decision aiding. His research has been published in such journals as European Journal of Operational Research, Computers & Operations Research, Journal of the Operational Research Society, Journal of Mathematical Modeling and Algorithms, European Business Review, Annals of Operations Research, Fuzzy Sets and Systems, 4OR, Socio-Economic Planning Sciences, Journal of Multi-Criteria Decision Analysis,and OMEGA. He is the co-editor of the book, "Multiple Criteria Decision Analysis: State of the Art Surveys, Springer Science + Business Media, Inc, 2005. He is the currently serves as Editor of the Newsletter of the European Working Group on Multiple Criteria Decision Aiding and one of the coordinators of this group. He is also member of the Executive Committee of the International Society of Multiple Criteria Decision Making.

Salvatore Greco is a full professor at the Department of Economics, Catania University.  His main research interests are in the field of multicriteria decision aid, in the application of the rough set approach to decision analysis, in the axiomatic foundation of multicriteria methodology and in the fuzzy integral approach to MCDA. In these fields he cooperates with many researchers of different countries He received the Best Theoretical Paper Award, by the Decision Sciences Institute (Athens, 1999). Together with Benedetto Matarazzo, he organized the VII International Summer School on  MCDA (Catania, 2000). He is author of many articles published in important international