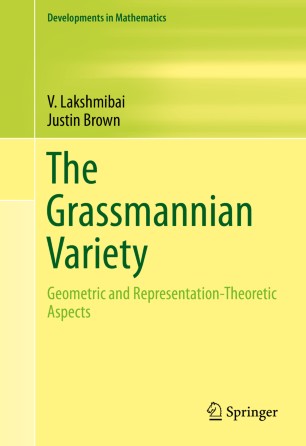 Part of the Developments in Mathematics book series (DEVM, volume 42)

This text would serve well as a reference book for a graduate work on Grassmannian varieties and would be an excellent supplementary text for several courses including those in geometry of spherical varieties, Schubert varieties, advanced topics in geometric and differential topology, representation theory of compact and reductive groups, Lie theory, toric varieties, geometric representation theory, and singularity theory.​ The reader should have some familiarity with commutative algebra and algebraic geometry.

“The present book gives a detailed treatment of the standard monomial theory (SMT) for the Grassmannians and their Schubert subvarieties along with several applications of SMT. It can be used as a reference book by experts and graduate students who study varieties with a reductive group action such as flag and toric varieties.” (Valentina Kiritchenko, zbMATH 1343.14001, 2016)

“The book under review is more elementary; it is exclusively devoted to Grassmannians and their Schubert subvarieties. The book is divided into three parts. … This is a nicely written book, one that may appeal to students and researchers in related areas.” (Felipe Zaldivar, MAA Reviews, maa.org, December, 2015)