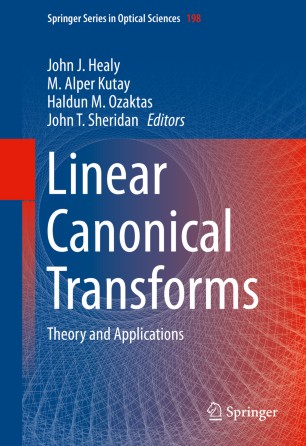 This book provides a clear and accessible introduction to the essential mathematical foundations of linear canonical transforms from a signals and systems perspective. Substantial attention is devoted to how these transforms relate to optical systems and wave propagation. There is extensive coverage of sampling theory and fast algorithms for numerically approximating the family of transforms. Chapters on topics ranging from digital holography to speckle metrology provide a window on the wide range of applications.

This volume will serve as a reference for researchers in the fields of image and signal processing, wave propagation, optical information processing and holography, optical system design and modeling, and quantum optics. It will be of use to graduate students in physics and engineering, as well as for scientists in other areas seeking to learn more about this important yet relatively unfamiliar class of integral transformations.

John J. Healy was born in Dublin. He was awarded the BE and PhD degrees in electronic engineering by University College Dublin in 2005 and 2010. He worked as a Postdoctoral Fellow in Universidad Nacional Autónoma de México (UNAM) and Maynooth University. Healy is a member of IEEE, OSA and SPIE. He was a finalist in the European Community "Best PhD thesis in Computational Methods in Applied Sciences and Engineering 2010", and was awarded a Postdoctoral Fellowship from Irish Research Council for Science, Engineering and Technology (IRCSET) in 2010, and a NUI Fellowship in the Sciences in 2012. Since January 2015, he has been a Lecturer in Electronic Engineering at University College Dublin and Beijing Dublin International College at BJUT. His research interests span computational and applied optics, including the linear canonical transform, sampling theory, digital holography and 3D imaging, and time-frequency representations.

M. Alper Kutay received his BS, MS and PhD degrees in Electrical and Electronics Engineering from Bilkent University, Ankara in 1993, 1995 and 1999 respectively. Between March 1999 and July 2000 he was at the Communications and Signal Processing Laboratory, Drexel University, Philadelphia as a Postdoctoral Research Associate. He has been with The Scientific and Technological Research Council of Turkey (TUBITAK) since 2000. Positions he held include Acting Vice President of TUBITAK, Acting Director of the Advanced Technologies Research Institute, Project Leader, and Systems Engineer. He is currently Advisor to the President. He has been the technical leader of numerous research and development projects. He has published 25 refereed journal articles and 3 book chapters, and is the coauthor of The Fractional Fourier Transform (Wiley 2001). His publications have received more than 1500 citations. His research interests include signal detection, parameter estimation, radar signal processing, and time-frequency analysis.

Haldun M. Ozaktas received a BS degree from Middle East Technical University, Ankara in 1987, and a PhD degree from Stanford University, California in 1991. He joined Bilkent University, Ankara in 1991, where he is presently Professor of Electrical Engineering. In 1992 he was at the University of Erlangen-Nürnberg, Bavaria as an Alexander von Humboldt Foundation Postdoctoral Fellow. Over the summer of 1994 he worked as a Consultant at Bell Laboratories, New Jersey. He is the author of over 110 refereed journal articles, 15 book chapters, and over 110 conference presentations and papers, about 45 of which have been invited. He is author of The Fractional Fourier Transform (Wiley 2001) and editor of Three-Dimensional Television (Springer 2008) and Linear Canonical Transforms (Springer 2015). A total of over 5000 citations to his work are recorded in the Science Citation Index (ISI). He is the recipient of the 1998 ICO International Prize in Optics and one of the youngest recipients ever of the Scientific and Technical Research Council of Turkey (TUBITAK) Science Award (1999), among other awards and prizes. Haldun M. Ozaktas was also one of the youngest persons elected to full membership of the Turkish Academy of Sciences. He is a Fellow of OSA, SPIE, and IEEE. His academic interests include optical information processing, signal and image processing, and optoelectronic and optically interconnected computing systems.

John T. Sheridan, BE (NUIG), MScEE (Georgia Tech), DPhil (Oxford University), held an Alexander von Humboldt Foundation Postdoctoral Research Fellowship in Erlangen-Nürnberg University and was a Visiting Scientist at the European Commission Joint Research Centre in Italy. He was appointed as a Permanent Lecturer in Dublin Institute of Technology in 1997. He joined the School of Electrical and Electronic Engineering, University College Dublin in 2000, where he is currently Professor of Optical Engineering. He is the co-founder and Director of Equilume Ltd. In 2014 he became an SPIE Fellow. He has authored over 400 publications and chairs several international conferences.

“It gives an up-to-date overview of the many aspects of the LCT. … This book is a most welcome addition to the literature. … This is a collection of survey papers written by renowned specialists that give a state-of-the-art of the many aspects of the linear canonical transform with an emphasis on the optical interpretation and applications.” (Adhemar Bultheel, European Mathematical Society, euro-math-soc.eu, February, 2016)