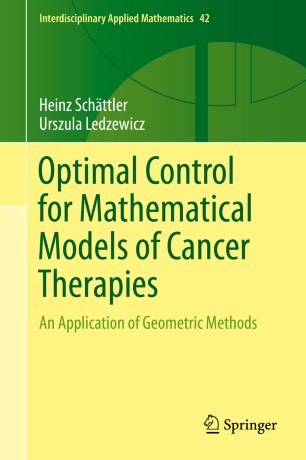 An Application of Geometric Methods

This book presents applications of geometric optimal control to real life biomedical problems with an emphasis on cancer treatments. A number of mathematical models for both classical and novel cancer treatments are presented as optimal control problems with the goal of constructing optimal protocols. The power of geometric methods is illustrated with fully worked out complete global solutions to these mathematically challenging problems. Elaborate constructions of optimal controls and corresponding system responses provide great examples of applications of the tools of geometric optimal control and the outcomes aid the design of simpler, practically realizable suboptimal protocols. The book blends mathematical rigor with practically important topics in an easily readable tutorial style. Graduate students and researchers in science and engineering, particularly biomathematics and more mathematical aspects of biomedical engineering, would find this book particularly useful.

Heinz Schättler is a Professor of Electrical and Systems Engineering at Washington University in St. Louis. He holds a Master's degree in Mathematics from the University of Würzburg in Germany and a Ph.D. in Mathematics from Rutgers University. His main research area is optimal control theory where he has published extensively on applications of methods and tools from optimal control and dynamical systems theory to problems motivated by real life applications. Besides the medical topics that are the focus of this text, these include electric power systems as well as models in economics, physics and electronics.

Urszula Ledzewicz is a Distinguished Research Professor in the Department of Mathematics and Statistics at Southern Illinois University Edwardsville. She specialized in optimal control theory at the University of Lodz, Poland, where she received a master’s and doctorate in Applied Mathematics. Her research interests include optimal control and optimization, mathematical modeling and analysis of systems in biomedicine with special emphasis on mathematical models for cancer growth and treatments. She has been active in the field as an Associate Editor of numerous scientific journals focused on nonlinear analysis, dynamical systems and mathematical biosciences.

“The book is a self-contained monograph on the application of tools and techniques of optimal control theory to a wide class of problems arising in oncology. … All considerations are presented in a rigorous mathematical language, but the authors do their best to be understandable also for researchers involved in systems biology with a moderate mathematical background.” (Andrzej Świerniak, zbMATH 1331.92008, 2016)