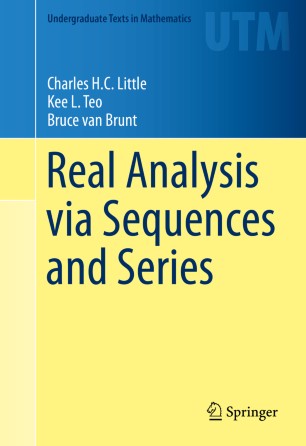 Real Analysis via Sequences and Series

This text gives a rigorous treatment of the foundations of calculus. In contrast to more traditional approaches, infinite sequences and series are placed at the forefront. The approach taken has not only the merit of simplicity, but students are well placed to understand and appreciate more sophisticated concepts in advanced mathematics. The authors mitigate potential difficulties in mastering the material by motivating  definitions, results, and proofs. Simple examples  are provided to  illustrate new material and exercises are included at the end of most sections. Noteworthy topics include: an extensive discussion of convergence tests for infinite series, Wallis’s formula and Stirling’s formula, proofs of the irrationality of π and e, and a treatment of Newton’s method as a special instance of finding fixed points of iterated functions.

“The list of main topics covered is quite standard: sequences, series, limits, continuity, differentiation, Riemann integration, uniform convergence … . This is a well-written textbook with an abundance of worked examples and exercises that is intended for a first course in analysis with modest ambitions.” (Brian S. Thomson, Mathematical Reviews, March, 2016)

“The authors … introduce sequences and series at the beginning and build the fundamental concepts of analysis from them. … it achieves the same goal of introducing students to mathematical rigor and basic concepts and results in real analysis. … Summing Up: Recommended. Upper-division undergraduates.” (D. Z. Spicer, Choice, Vol. 53 (5), January, 2016)

“This textbook is based on the central idea that concepts such as continuity, differentiation and integration are approached via the concepts of sequences and series. … Most of the sections are followed by exercises. The textbook is recommended for a first course in mathematical analysis.” (Sorin Gheorghe Gal, zbMATH, Vol. 1325.26002, 2016)