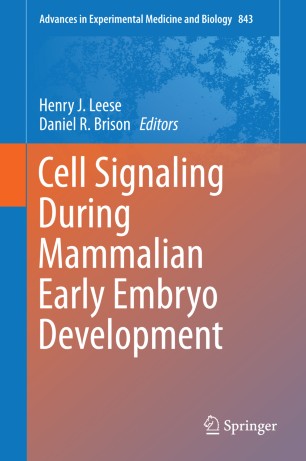 Part of the Advances in Experimental Medicine and Biology book series (AEMB, volume 843)

The book considers signaling events from the zygote embryo through to the blastocyst with relevant data from embryonic stem (ES) cells, including dialogue with the extracellular environment and with the maternal tract during the implantation process. Application of the knowledge described to improve the success of human and animal assisted conception is considered where appropriate, but the focus is largely on fundamental rather than applied cell/molecular biology, as this is the area that has historically been neglected. While the general features of metabolism during preimplantation development are well established, especially in terms of nutrient requirements, uptake and fate, remarkably little is known about early embryo signaling events, intracellular or intercellular, between individual embryos in vitro or with the female reproductive tract in vivo. This contrasts with the wealth of information on cell signaling in somatic cells and tissues, as a glance at any textbook of biochemistry illustrates. This lack of information is such that our understanding of the molecular cell biology of early embryos -- a prerequisite to defining the mechanisms which regulate development at this critical stage of the life cycle -- is seriously incomplete. This volume is the first to address this issue by describing the current state of knowledge on cell signaling during mammalian early embryo development and highlighting priority areas for research.