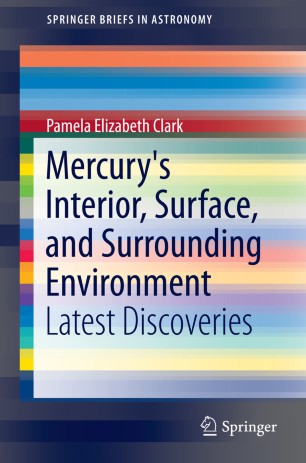 This SpringerBrief details the MESSENGER Mission, the findings of which present challenges to widely held conventional views and remaining mysteries surrounding the planet. The work answers the question of why Mercury is so dense, and the implications from geochemical data on its planetary formation. It summarizes imaging and compositional data from the terrestrial planet surface processes and explains the geologic history of Mercury.  It also discusses the lack of southern hemisphere coverage.

Our understanding of the planet Mercury has been in a transitional phase over the decades since Mariner 10. The influx of new data from the NASA MESSENGER Mission since it was inserted into the orbit of Mercury in March of 2011 has greatly accelerated that shift. The combined compositional data of relatively high volatiles (S, K), relatively low refractories (Al, Ca), and low crustal iron, combined with an active, partially molten iron rich core, has major implications for Mercury and Solar System formation. From a scientist at NASA Goddard Space Flight Center, this presents a comprehensive overview of the discoveries from the ten-year MESSENGER mission.