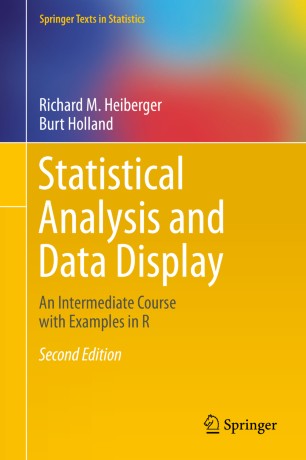 An Intermediate Course with Examples in R

extensive use of graphical displays for exploring data and for

displaying the analysis.  The authors demonstrate how to analyze

all the methods they cover. They emphasize how to construct and

interpret graphs. They discuss principles of graphical design. They

identify situations where visual impressions from graphs may need

confirmation from traditional tabular results. All chapters have

display formats. All graphs and tabular output in the book were

constructed using these functions. Complete R scripts for all examples

master’s level and for other quantitatively oriented disciplines at

the doctoral level, and as a reference book for researchers. In-depth

discussions of regression analysis, analysis of variance, and design

of experiments are followed by introductions to analysis of discrete

techniques with a variety of case studies using both newer graphical

The Second Edition features graphs that are completely redrawn using

package. There are new sections in several of the chapters, revised

sections in all chapters and several completely new appendices.

• an expanded chapter on graphics;

rating scales in fields from population studies to psychometrics;

• an expanded discussion on the design of multi-panel graphics;

• expanded and new sections in the discrete bivariate statistics chapter

tables for which the Mantel–Haenszel–Cochran test is appropriate;

• an interactive (using the shiny package) presentation of the graphics

The new appendices include discussions of R, the HH package

set of standalone functions with the First Edition of this book), the

R Commander package, the RExcel system, the shiny package, and a

minimal discussion on writing R packages. There is a new appendix on

(Frequently Asked Questions) about the differences between the

system used in computers. The probability distributions appendix has

base R) and to include graphs of each. The editing appendix from the

First Edition has been split into four expanded appendices—on working

style, writing style, use of a powerful editor, and use of LaTeX for

Burt Holland was Professor in the Department of Statistics of Temple University, an elected Fellow of the American Statistical Association, Chair of the Department of Statistics of Temple University, and Chair of Collegial Assembly of the Fox School.  He has taught short courses at the Joint Statistics Meetings and the Deming Conference on Applied Statistics.  He has made many contributions to linear modeling and simultaneous statistical inference.  He frequently served as consultant to medical investigators.  He developed a very popular General Education course on Statistics and the News.

“It is a thorough and self-contained book. Keeping with the spirit with earlier edition, the second edition is well organized and structured and builds on statistical knowledge and its appreciation in a logical and concise manner. The book provides a host of useful topics and techniques for students in the niche of statistical analysis and data display. The book can adopted as textbook for an intermediate level statistics course.” (S. E. Ahmed, Technometrics, Vol. 58 (3), August, 2016)