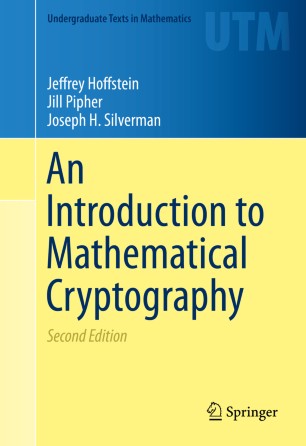 An Introduction to Mathematical Cryptography

This self-contained introduction to modern cryptography emphasizes the mathematics behind the theory of public key cryptosystems and digital signature schemes. The book focuses on these key topics while developing the mathematical tools needed for the construction and security analysis of diverse cryptosystems. Only basic linear algebra is required of the reader; techniques from algebra, number theory, and probability are introduced and developed as required. This text provides an ideal introduction for mathematics and computer science students to the mathematical foundations of modern cryptography. The book includes an extensive bibliography and index; supplementary materials are available online.

The book covers a variety of topics that are considered central to mathematical cryptography. Key topics include:

The second edition of An Introduction

to Mathematical Cryptography includes a significant revision of the material on digital signatures, including an earlier introduction to RSA, Elgamal, and DSA signatures, and new material on lattice-based signatures and rejection sampling. Many sections have been rewritten or expanded for clarity, especially in the chapters on information theory, elliptic curves, and lattices, and the chapter of additional topics has been expanded to include sections on digital cash and homomorphic encryption. Numerous new exercises have been included.

Dr. Jeffrey Hoffstein has been a professor at Brown University since 1989 and has been a visiting professor and tenured professor at several other universities since 1978. His research areas are number theory, automorphic forms and cryptography. He has authored more than 50 publications.

Dr. Jill Pipher has been a professor at Brown University since 1989. She has been an invited lecturer and has received numerous awards and honors. Her research areas are harmonic analysis, elliptic PDE, and cryptography. She has authored over 40 publications.

Dr. Joseph Silverman has been a professor at Brown University since 1988. He served as the Chair of the Brown Mathematics department from 2001–2004. He has received numerous fellowships, grants and awards and is a frequently invited lecturer. His research areas are number theory, arithmetic geometry, elliptic curves, dynamical systems and cryptography. He has authored more than 130 publications and has had more than 20 doctoral students.

“This book explains the mathematical foundations of public key cryptography in a mathematically correct and thorough way without omitting important practicalities. … I would like to emphasize that the book is very well written and quite clear. Topics are well motivated, and there are a good number of examples and nicely chosen exercises. To me, this book is still the first-choice introduction to public-key cryptography.” (Klaus Galensa, Computing Reviews, March, 2015)

“This is a text for an upper undergraduate/lower graduate course in mathematical cryptography. … It is very well written and quite clear. Topics are well-motivated, and there are a good number of examples and nicely chosen exercises. … An instructor of a fairly sophisticated undergraduate course in cryptography who wants to emphasize public key cryptography should definitely take a look at this book.” (Mark Hunacek, MAA Reviews, October, 2014)
Buy options