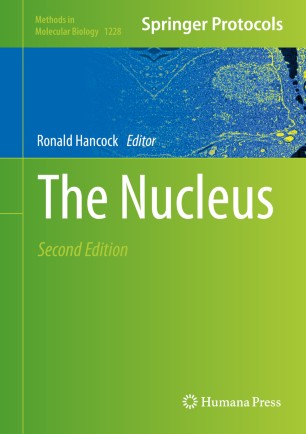 This volume presents detailed, recently-developed protocols ranging from isolation of nuclei to purification of chromatin regions containing single genes, with a particular focus on some less well-explored aspects of the nucleus. The methods described include new strategies for isolation of nuclei, for purification of cell type-specific nuclei from a mixture, and for rapid isolation and fractionation of nucleoli. For gene delivery into and expression in nuclei, a novel gentle approach using gold nanowires is presented. As the concentration and localization of water and ions are crucial for macromolecular interactions in the nucleus, a new approach to measure these parameters by correlative optical and cryo-electron microscopy is described. The Nucleus, Second Edition presents methods and software for high-throughput quantitative analysis of 3D fluorescence microscopy images, for quantification of the formation of amyloid fibrils in the nucleus, and for quantitative analysis of chromosome territory localization. Written in the successful Methods in Molecular Biology series format, chapters include introductions to their respective topics, lists of the necessary materials and reagents, step-by-step, readily reproducible protocols, and notes on troubleshooting and avoiding known pitfalls.

Authoritative and easily accessible, The Nucleus, Second Edition seeks to serve both professionals and novices with its well-honed methods for the study of the nucleus.