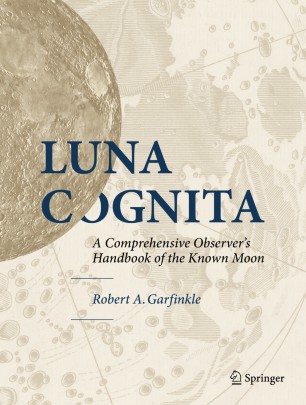 A Comprehensive Observer’s Handbook of the Known Moon

This comprehensive, all-in-one handbook takes you on an incomparable journey of our closest celestial neighbor. Not since the golden age of 19th-century lunar guidebooks has one text managed to cover the Moon in such detail as this three-volume set.

The handbook begins with a section on the Moon’s place in human history, mythology and lore, before gravitating closer to the Moon itself through scientific sections on the Earth-Moon system, lunar motions and cycles. Following these are technical chapters on how to purchase, use and care for lunar observing and photography equipment. Techniques for observing the Moon (both with the naked eye and optical instruments) are detailed as the reader approaches the Moon’s surface on this visual tour-de-force.

A close-up exploration of the Moon is the result. The “crater-hop” chapters discuss the physical aspects of the Moon’s features, offering brief biographical information on the person for whom the feature is named, as well as how each individual was involved in the development of science and selenography from ancient to modern times.

Luna Cognita goes far beyond any recent work in both breadth and depth of coverage on the Moon. Written in an accessible, engaging manner for readers of all backgrounds and levels of expertise, this handbook is thus an invaluable resource for anybody who looks up at the glowing sphere in the night sky and wants to learn more about the “Known Moon.”

Robert A. Garfinkle, FRAS is an internationally recognized independent scholar on the history of astronomy and is a highly regarded amateur astronomer. He has been a professional writer for about 40 years. In addition to his two published astronomy books, Garfinkle has published book reviews, articles, and short stories. He is the author of the international best-selling astronomy book Star-Hopping: Your Visa to Viewing the Universe (CUP, 1994, 1997), a co-author of Advanced Skywatching (The Nature Company; Time-Life Books, 1997), and a contributing author to the Biographical Encyclopedia of Astronomers (Springer, 2007). Star-Hopping was the Alternate Selection for November 1995 of the Astronomy Book Club. Advanced Skywatching has been republished under different titles as well as having been translated into German and Spanish language editions. Reviews of Advanced Skywatching have praised the star-hopping section of the book, of which Garfinkle was the primary author.

Garfinkle is a life member of the California Writers Club (CWC). He is also the co-founder and first President of the new Fremont Area Writers (2008–2010), which is now the eighteenth branch of the CWC. In 2009, Garfinkle received the prestigious Jack London Award for outstanding service to his branch and CWC and in July 2010, he was elected President of CWC. He has also been awarded the Ina Coolbrith Award for service to CWC.

“Everything about these volumes demonstrates the most meticulous attention to detail, arrangement, editing and proof-reading. In strongly recommending Lun Cognita to the reader, I warmly congratulate both author and publisher in having brought us an affordable and truly monumental lunar encyclopaedia.” (Richard McKim, Journal of the British Astronomical Association, Vol. 130 (5), 2020)
“This is a work that should be acquired by everyone interested in our Moon, and Robert Garfinkle should be congratulated on an outstanding contribution to the literature on the subject.” (Bill LeatherBarrow, The Observatory, Vol. 140 (1278), October, 2020)
“This wonderful set has something for every observer. … Altogether, the set is beautifully published, with quality printing, good photos, and solid binding.” (Nick Kanas, Sky & Telescope, December, 2020)
“Luna Cognita is a triumph of both Garfinkle’s desire to spread his love of the Moon and Springer’s ability to publish such a huge high-quality volume. Luna Cognita effectively folds lunar mystery and lore, science and statistics, facts and figures and observational data into one massive collection that more than fulfills a true selenophile’s yearning to have everything Moon at their fingertips.” (Robert Reeves, Journal of the Association of Lunar & Planetary Observers, Vol. 62 (3), 2020)
“It is a comprehensive guide in three volumes, the type of which has not been published in such length for years. … This is an astonishing piece of work, 30 years in the making: an exceptional book that the writer should be very proud of. FIVE STARS.” (Katrin Raynor-Evans, BBC Sky at night magazine, March, 2020)
Buy options