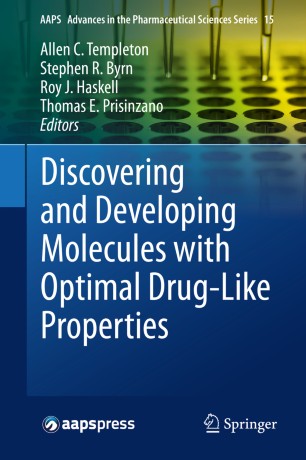 This authoritative volume provides a contemporary view on the latest research in molecules with optimal drug-like properties. It is a valuable source to access current best practices as well as new research techniques and strategies. Written by leading scientists in their fields, the text consists of fourteen chapters with an underlying theme of early collaborative opportunities between pharmaceutical and discovery sciences. The book explores the practical realities of performing physical pharmaceutical and biopharmaceutical research in the context of drug discovery with short timelines and low compound availability. Chapters cover strategies and tactics to enable discovery as well as predictive approaches to establish, understand and communicate risks in early development. It also examines the detection, characterization and assessment of risks on the solid state properties of advanced discovery and early development candidates, highlighting the link between solid state properties and critical development parameters such as solubility and stability. Final chapters center on techniques to improve molecular solubilization and prevent precipitation, with particularly emphasis on linking physiochemical properties of molecules to formulation selection in preclinical and clinical settings.

Dr. Allen C. Templeton is executive director of the Analytical Sciences organization within Merck Research Laboratories. He is responsible for the managing staff in the pursuit of scientific problem-solving for pharmaceutical product development. Before assuming his current position, Dr. Templeton held positions of increasing responsibility within Merck, including leadership roles in preformulation and formulation. Dr. Templeton earned his Ph.D. in analytical chemistry from the University of North Carolina at Chapel Hill. His research experience has been in the area of analytical and materials chemistry. He has published more than fifty articles, served as co-inventor on eleven patents and authored more than 120 presentations in the area of pharmaceutical analysis. He has organized a number of symposia and training courses on diverse topics within the field of pharmaceutical characterization. Dr. Templeton is an active member in a number of professional organizations, including the American Association of Pharmaceutical Scientists (AAPS) and the American Chemical Society (ACS). He has served in a number of roles for AAPS and is most recently the secretary/treasurer of the Physical Pharmacy and Biopharmaceutics section. He was elected to the United States Pharmacopeia (USP) expert committee on physical analysis and has worked to revise a number of USP standard chapters.  He is also currently serving on the Analytical Leadership Group for the International Consortium for Innovation & Quality in Pharmaceutical Development (IQ).  He is on the editorial advisory boards for the Journal of Pharmaceutical Sciences, American Pharmaceutical Review and Current Drug Delivery.

Dr. Stephen R. Byrn is Charles B. Jordan Professor of Medicinal Chemistry in the Department of Industrial and Physical Pharmacy, Purdue University.  Dr. Byrn set in motion the development of the field of solid state chemistry of drugs with his books and papers on the subject. He has also taught more than 100 short courses on solid state chemistry and pharmaceutical solids and has educated more than fifty Ph.D. students and postdoctoral fellows. Dr. Byrn has had numerous grants, including one of the first thirteen from NIH Centers for AIDS Research. Dr. Byrn is cofounder of Purdue’s graduate programs in regulatory and quality compliance. He is also cofounder of the Purdue-Kilimanjaro School of Pharmacy graduate certificate program in industrial pharmacy and manufacturing in Moshi, Tanzania. Dr. Byrn has served as chair of the Pharmaceutical Sciences Advisory Committee to the FDA and chaired several USP committees. Dr. Byrn is also cofounder of SSCI, Inc. (Solid State Chemical Information), a cGMP research and information company now owned by Aptuit. Dr. Byrn is an elected Fellow of the American Association of Pharmaceutical Scientists (AAPS) and has received several awards for his research and entrepreneurial activities including the first AAPS David Grant Award for Research Achievement in Physical Pharmacy. The Journal of Pharmaceutical Sciences has a special issue dedicated to Dr. Byrn. His current research interests include strategies for accelerated drug development and the use of synchrotron X-rays for pharmaceutical research.

Dr. Roy J. Haskell is a Research Fellow in the Discovery Pharmaceutics group of Bristol-Myers Squibb, where he is engaged in discovery support as well as the design and characterization of novel formulations. He received a Ph.D. in Analytical Chemistry from the University of Wisconsin–Madison. He joined The Upjohn Company and worked in the area of protein biophysics. As part of Pharmacia, his focus transitioned to formulating poorly soluble molecules and characterizing the formulations by which such compounds are delivered. Dr. Haskell's research interests include design and characterization of colloidal formulations, predictive modeling of physicochemical properties, sizing submicron particles, aggregation/precipitation mechanisms, the role of solubility and supersaturation in oral absorption, and the use nanotechnology in drug discovery and development. Dr. Haskell is the author of three patents and more than 30 publications and presentations.

Dr. Thomas E. Prisinzano received his Ph.D. in Pharmaceutical Sciences from the School of Pharmacy, Virginia Commonwealth University, in Richmond, Virginia. He was an Intramural Research Training Award Fellow in the National Institute of Diabetes and Digestive and Kidney Diseases in Bethesda, Maryland, and is currently Professor and Chair of the Department of Medicinal Chemistry at the University of Kansas. His research focuses on the development of novel agents to treat pain, substance abuse and other CNS disorders through the identification, structure elucidation, and optimization of natural products. Dr. Prisinzano has received a number of awards including the D. John Faulkner Travel Award from the American Society of Pharmacognosy, the Jack L. Beal Award from the Journal of Natural Products, the Matt Suffness (Young Investigator) Award from the American Society of Pharmacognosy, the Joseph Cochin Young Investigator Award from the College on Problems of Drug Dependence, and the David W. Robertson Award for Excellence in Medicinal Chemistry from the American Chemical Society.