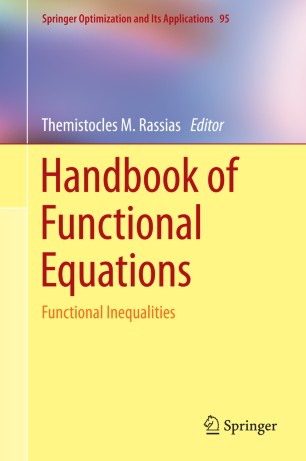 Part of the Springer Optimization and Its Applications book series (SOIA, volume 95)

As Richard Bellman has so elegantly stated at the Second International Conference on General Inequalities (Oberwolfach, 1978), “There are three reasons for the study of inequalities: practical, theoretical, and aesthetic.” On the aesthetic aspects, he said, “As has been pointed out, beauty is in the eye of the beholder. However, it is generally agreed that certain pieces of music, art, or mathematics are beautiful. There is an elegance to inequalities that makes them very attractive.”

The content of the Handbook focuses mainly on both old and recent developments on approximate homomorphisms, on a relation between the Hardy–Hilbert and the Gabriel inequality, generalized Hardy–Hilbert type inequalities on multiple weighted Orlicz spaces, half-discrete Hilbert-type inequalities, on affine mappings, on contractive operators, on multiplicative Ostrowski and trapezoid inequalities, Ostrowski type inequalities for the  Riemann–Stieltjes integral, means and related functional inequalities, Weighted Gini means, controlled additive relations, Szasz–Mirakyan operators,  extremal problems in polynomials and entire functions,  applications of functional equations to Dirichlet problem for doubly connected domains, nonlinear elliptic problems depending on parameters, on strongly convex functions, as well as applications to some new algorithms for solving general equilibrium problems, inequalities for the Fisher’s information measures, financial networks, mathematical models of  mechanical fields in media with inclusions and holes.