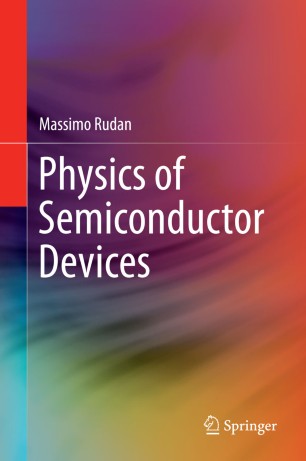 This book describes the basic physics of semiconductors, including the hierarchy of transport models, and connects the theory with the functioning of actual semiconductor devices.  Details are worked out carefully and derived from the basic physics, while keeping the internal coherence of the concepts and explaining various levels of approximation. Examples are based on silicon due to its industrial importance. Several chapters are included that provide the reader with the quantum-mechanical concepts necessary for understanding the transport properties of crystals. The behavior of crystals incorporating a position-dependent impurity distribution is described, and the different hierarchical transport models for semiconductor devices are derived (from the Boltzmann transport equation to the hydrodynamic and drift-diffusion models). The transport models are then applied to a detailed description of the main semiconductor-device architectures (bipolar, MOS). The final chapters are devoted to the description of some basic fabrication steps, and to  measuring methods for the semiconductor-device parameters.

M. Rudan (b. 1949) graduated in Electrical Engineering (1973) and in Physics (1976), both at the University of Bologna, Italy. Lecturer (1978), Associate Professor (1985), and Full Professor of Electronics (1990) at the Faculty of Engineering of the same University. Early investigations (1975-1980) in the field of the analytical modeling of semiconductor devices. Since 1980 M. R. has been working in a group involved in investigations on physics of carrier transport and numerical analysis of semiconductor devices. Visiting scientist, on a one-year assignment (1986), at the IBM T. J. Watson Research Center, studying solution methods for the Boltzmann Transport Equation. Reviewer and Guest Editor of the IEEE Transactions on Computer-Aided Design and IEEE Transactions on Electron Devices; Editor of COMPEL and of the International Journal of Numerical Modeling; Reviewer of the IEEE Electron Device Letters, Solid-State Electronics, Electronics Letters, Physical Review B, Journal of Applied Physics; Program Chairman, Chairman, or Committee Member, of the IEDM, SISDEP (SISPAD), ESSDERC, and IWCE International Conferences. With H. Baltes and W. Göpel, M. R. is a recipient of the 1998 Körber Foundation Award for the Project “Elektronische ‘Mikronase’ für flüchtige organische Verbindungen” (“Electronic ‘Micronose’ for Volatile Organic Compounds”). In 2001 M. R. was one of the founders of the Advanced Research Center for Electronic Systems (ARCES) of the University of Bologna. Distinguished Lecturer of the Electron Device Society of the IEEE (2004) and IEEE Fellow (2008).