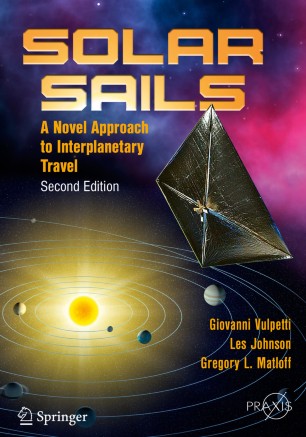 A Novel Approach to Interplanetary Travel

The reality of sunlight-based sailing in space began in May 2010,  and solar sail technology and science have continued to evolve rapidly through new space missions. Using the power of the Sun's light for regular travel propulsion will be the next major leap forward in our journey to other worlds. This book is the second edition of the fascinating explanation of solar sails, how they work and how they will be used in the exploration of space. Updated with 35% new material, this second edition includes three new chapters on missions operated by Japan and the US, as well as projects that are in progress. The remainder of the book describes the heritage of exploration in water-borne sailing ships and the evolution to space-vehicle propulsion; as well as nuclear, solar-electric, nuclear-electric and antimatter rocket devices. It also discusses various sail systems that may use either sunlight or solar wind, and the design, fabrication and steering challenges associated with solar sails. The first edition was met with overwhelmingly positive reviews, and deemed “a title that needs to be on your shelf if you’re seriously interested in the next step as we move beyond rocketry" (Centauri Dreams, September 2008). Written with a mixed approach, this book appeals to both the general public as well as those with a more scientifically technical background.