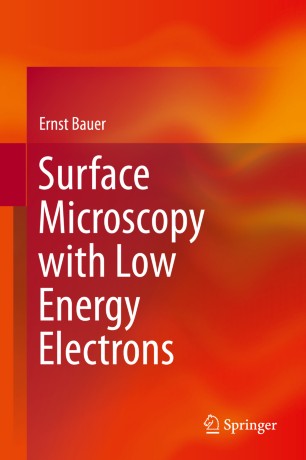 Professor Ernst Bauer is a distinguished German-American physicist and surface scientist who has made fundamental contributions to the understanding of epitaxial growth and to the development of microscopy techniques. He is one of the founders of surface physics and the physics of thin films.

His work directly or indirectly impacts many areas of modern materials science: surfaces, thin films, electronic materials and instrumentation. The invention and development of surface microscopy with slo

w electrons has revolutionized the study of surface science and thin film science.

Ernst Bauer has authored or co-authored more than 450 publications (among them 85 review papers and book chapters) and one book ("Electron Diffraction: Theory, Practice and Applications", 1958, in German). His papers are widely cited.

Numerous LEEM instruments are now installed and are operating in many laboratories and synchrotron radiation facilities around the world (USA, Europe, Asia and Australia). An important recognition for Ernst Bauer’s efforts in the field of surface microscopy is the increasing number of the scientists involved in LEEM research, which is reflected in the organization of bi-annual LEEM/PEEM workshops, the first of which was organized by Ernst Bauer and Anastassia Pavlovska in Arizona in 1998.

Broad international collaboration is typical of Ernst Bauer’s research. He had longstanding scientific cooperations with NASA, University of Pretoria (South Africa), Synchrotron Radiation Source in Trieste (Italy), Poland, Ukraine, Bulgaria and Czech Republic. About 80 visiting scientists had a possibility to perform high quality research in his group in Germany. Presently he has collaborations with Japan, Poland, Italy, Germany and Hong Kong.

The scientific achievements of Ernst Bauer have been multiply honored. He was the recipient of the E.W. Muller Award in 1985, the Gaede Prize of the German Vacuum Society in 1988, the Medard W. Welch Award of the Ame

rican Vacuum Society in 1992, the Niedersachsenpreis for Science (Germany) in 1994, the BESSY Innovation Award on Synchrotron Radiation in 2004 and the very prestigious Davisson-Germer Prize of the American Physical Society in 2005. In 2003 Ernst Bauer received the first Award of the Japan Society of Promotion of Science's 141st Committee on Microbeam Analysis and was made an honorary member of this organization. He was elected a Member of the Goettingen Academy of Sciences in 1989, Fellow of the American Physical Society in 1991 and Fellow of the American Vacuum Society in 1994. In 2008 he was honored with a Humboldt Research Prize and Doctor Honoris Causa at the Marie Sklodovska-Curie University, Lublin, Poland. In 2012 he was appointed Fellow of Elettra Sincrotrone Trieste and in 2014 he received the Doctor Honoris Causa title from the University of Wrocław, Poland.

More information can be found:

“The book is certain to become the bible of LEEM, PEEM, and related instruments. … this is essentially a book for experimentalists, packed with data, excellent figures (ray diagrams, plots of important experimental results), and photographs of instruments. The book is unusually clearly and concisely written, and well referenced … and truly represents the summation of a lifetime’s work devoted to this field by its originator.” (John C. H. Spence, Microscopy and Microanalysis, Vol. 21 (3), 2015)