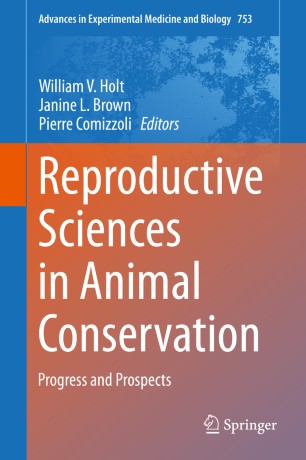 Part of the Advances in Experimental Medicine and Biology book series (AEMB, volume 753)

Reproductive biology is more than the development of techniques for helping with too little or too much breeding. While some of the relevant techniques are useful for individual species, technical developments have to be backed up by thorough biological understanding of the background behind the problems. This book is therefore threefold; (1) it provides a snapshot of the state of the art in terms of species-specific reproductive technologies, whether for individual animals or whole taxonomic groups; (2) it sets the reproductive problems in context and emphasizes the links between animal-based problems and the wider world, e.g. reproductive fitness and (3) it looks forward and presents realistic assessments of how effective some of the more recently developed techniques in reproductive technology might be at combating extinctions. This is a wide-ranging book that will be relevant to anyone involved in reproductive biology or in species conservation and provides provide them some useful perspectives about the real utility of current and emerging technologies. It has contributions from experts in reproduction and related fields.

Pierre Comizzoli, a gamete biologist at SCBI’s Center for Species Survival received one of the Presidential Early Career Award for Scientists and Engineers. President Obama named 94 researchers as recipients of the Presidential Early Career Awards for Scientists and Engineers, the highest honor bestowed by the United States government on science and engineering professionals in the early stages of their independent research careers. Sixteen Federal departments and agencies join together annually to nominate the most meritorious scientists and engineers whose early accomplishments show the greatest promise for assuring America’s preeminence in science and engineering and contributing to the awarding agencies' missions. Awardees are selected for their pursuit of innovative research at the frontiers of science and technology and their commitment to community service as demonstrated through scientific leadership, public education, or community outreach. Comizzoli's honor followed a prestigious nomination by the Office of the Director of the National Institutes of Health for studies on desiccated germinal vesicles to determine if they can be rehydrated and reanimated to facilitate recovery of the maternal genome, challenging existing paradigms about the practicality of mammalian oocyte (egg) preservation and storage. Pierre's research is oriented to both assisted reproductive techniques (artificial insemination, embryo transfer, in vitro fertilization, gamete and embryo cryopreservation) for endangered species, as well as the emerging field of fertility preservation that benefits, not only rare species, but human health as well.