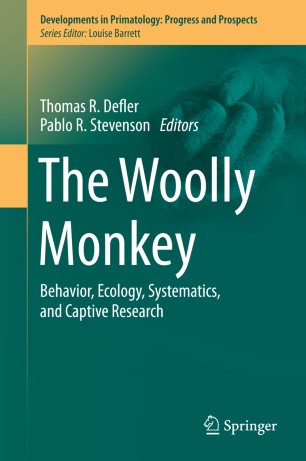 Part of the Developments in Primatology: Progress and Prospects book series (DIPR, volume 39)

Woolly monkeys are large, attractive and widespread primates found throughout many parts of the Amazon basin. It is only in the last twenty-five years or so that long-term studies of woollies in their forest habitat have been successful; they have not generally been successfully kept in captivity. But now, especially because of their size, these creatures are pressed on all sides by bush meat hunters and forest fragmentation. Their future is becoming critically precarious, and the editors feel that it is time to showcase these animals with a full book.

The editors draw together a number of recent woolly monkey studies from three Amazonian countries, including five taxa of woolly monkeys, four of which have recently been reclassified without using new biological criteria as species rather than subspecies (Groves, 2001, 2005; Rylands & Mittermeier, 2009). This volume provides a diversity of studies by well-known researchers and advanced students on a wide range of subjects using newly generated data, including a criticism of the recent taxonomic changes. The varied information contained within The Woolly Monkey: Behavior, Ecology, Systematics, and Captive Research  will help readers understand these handsome animals and will, we hope, energize them to contribute to their conservation.

Thomas R. Defler, Ph.D., a native English speaker but adopted Colombian, has studied primates for forty years, six years in the United States and thirty-four years in the field in Colombia. Most of his years in Colombia have been spent in eastern Colombian wilderness until his move to the National University campus in Bogotá seven years ago. He founded two research stations in the Colombian Amazon, both of which are still functioning, and he has trained many young Colombians in field techniques. Defler has 112 publications, including three authored books, one edited book and has just finished writing two more yet-unpublished books.

Pablo Stevenson, Ph.D., a Colombian native, has studied primates in the field for twenty-two years. Although he has investigated many species of primates, he is by far the most experienced primatologist in the world for research on Lagothrix, which he first began to study in 1988. Stevenson has over 100 publications, many of which involve or showcase Lagothrix. Pablo has trained many young Colombian primatologists as professor at Los Andes University. He has also published a book on the fruits of the Río Duda region, as well as edited two books on Colombian primates.

“This is the first volume devoted to the study of woolly monkey systematics, ecology, behavior, and conservation. Defler (National Univ. of Colombia) and Stevenson (Univ. of the Andes) have assembled a series of contributions by leading primatologists that provide an excellent overview of the current knowledge of the species. … Overall, this volume is a critical resource for students and scholars with a serious interest in New World primates. Summing Up: Essential. Primatology collections serving upper-division undergraduates and above.” (T. Harrison, Choice, Vol. 52 (8), April, 2015)