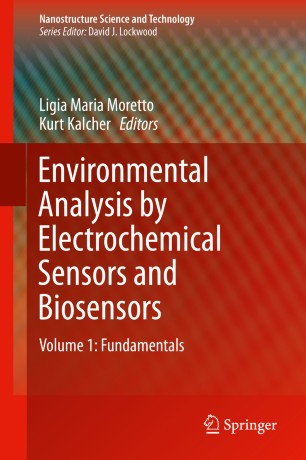 Part of the Nanostructure Science and Technology book series (NST)

Electrochemical sensors represent the oldest type of chemical sensors and are widely present in chemical laboratories, industries, healthcare and in many aspects of our daily life. During the past few decades biosensors mimicking biological receptors for the sake of analytical assessment have emerged as an extremely important and fruitful field in fundamental and applied electroanalytical chemistry. Research and routine analysis in environmental sciences have shown that electrochemical sensors and biosensors may supply useful information for solving problems from the quite general to the highly specific, dealing with environmental pollution or many other questions in connection with (bio)geochemical cycles or fundamental environmental chemical processes. Environmental analytical chemistry is a multidisciplinary field requiring the cooperation of chemists, biochemists, physicists, engineers and many other specialists, a collaboration which defines and guarantees the development and applicability of robust and highly sensitive sensors for chemical analysis and environmental monitoring. The aim of this book is to give an overview of the role of electrochemical sensors in environmental chemical analysis and on their operating principles. It provides detailed information on the applicability of such sensors to the determination of all the different substances of environmental importance. It is designed on one hand as a textbook for students and teachers, and, on the other, as a manual for researchers and applied scientists and engineers who are fully or marginally confronted with problems in context with environmental chemistry. Due to its multidisciplinary character the book synthesizes various viewpoints of different sciences and addresses chemists, physicists, pharmacists, medical doctors, engineers and in fact all who are interested, professionally or non-professionally, in the chemistry of our environment.

Ligia Maria Moretto graduated in Chemical engineering at the Federal University of Rio Grande do Sul, Brazil, and received her PhD in 1994 from the University Ca’ Foscari of Venice with a thesis “Ion-exchange voltammetry for the determination of copper and mercury. Application to seawater.” Her academic career began at the University of Caxias do Sul, Brazil, and followed at the Research Institute of Nuclear Energy, Sao Paulo, Brazil. In 1996 she had the habilitation as researcher in analytical chemistry at the University Ca’ Foscari of Venice. Working at the Laboratory of Electrochemical Sensors, her research field is the development of electrochemical sensor and biosensors based on modified electrodes, the study of gold arrays and ensembles of nanoelectrodes, with particular attention to environmental applications. She has published more than 60 full papers, several book chapters, and has presented 90 contributions at international conferences, resulting in more than 1100 citations. Dr. Moretto also collaborates as an invited professor and invited researcher with several institutions in Brazil, France, Argentina, Canada and USA.

Kurt Kalcher completed his studies at the Karl-Franzens University (KFU) with a dissertation in inorganic chemistry entitled “Contributions to the Chemistry of Cyantrichloride,  CINCCI2”; he also received his PhD in 1980 from the same institution. In 1981 he then went for a postdoctoral stay at the Nuclear Research Center in Jülich (Germany) under the supervision of Professor Nürnberg and Dr. Valenta, and conducted intensive electroanalytical research while he was there. Dr. Kalcher continued his academic career at KFU with his habilitation on chemically modified carbon paste electrodes in analytical chemistry in 1988. Since then, he has been employed there as an associate professor. His research interests include the development of electrochemical sensors and biosensors for the determination of inorganic and biological analytes on the basis of carbon paste, screen-printed carbon and boron-doped diamond electrodes, as well as design, automation and data handling with small analytical devices using microprocessors. He has published around 200 full papers and has presented about 200 contributions at international conferences. These activities have resulted in more than 3100 citations. Dr. Kalcher has received numerous guest professor position offers in Bosnia-Herzegovina, Poland, Slovenia, and Thailand.