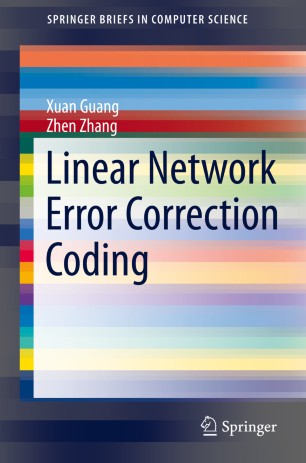 There are two main approaches in the theory of network error correction coding. In this SpringerBrief, the authors summarize some of the most important contributions following the classic approach, which represents messages by sequences similar to algebraic coding, and also briefly discuss the main results following the other approach, that uses the theory of rank metric codes for network error correction of representing messages by subspaces. This book starts by establishing the basic linear network error correction (LNEC) model and then characterizes two equivalent descriptions. Distances and weights are defined in order to characterize the discrepancy of these two vectors and to measure the seriousness of errors. Similar to classical error-correcting codes, the authors also apply the minimum distance decoding principle to LNEC codes at each sink node, but use distinct distances. For this decoding principle, it is shown that the minimum distance of a LNEC code at each sink node can fully characterize its error-detecting, error-correcting and erasure-error-correcting capabilities with respect to the sink node. In addition, some important and useful coding bounds in classical coding theory are generalized to linear network error correction coding, including the Hamming bound, the Gilbert-Varshamov bound and the Singleton bound. Several constructive algorithms of LNEC codes are presented, particularly for LNEC MDS codes, along with an analysis of their performance. Random linear network error correction coding is feasible for noncoherent networks with errors. Its performance is investigated by estimating upper bounds on some failure probabilities by analyzing the information transmission and error correction. Finally, the basic theory of subspace codes is introduced including the encoding and decoding principle as well as the channel model, the bounds on subspace codes, code construction and decoding algorithms.