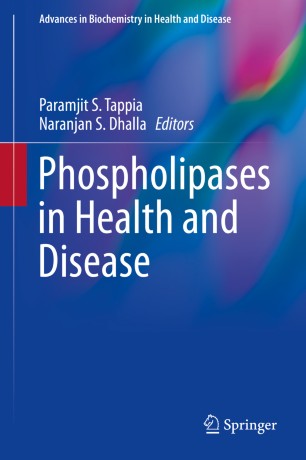 Phospholipases in Health and Disease

Part of the Advances in Biochemistry in Health and Disease book series (ABHD, volume 10)

Phospholipases generate lipid signaling molecules through their hydrolytic action on phospholipids and are known to regulate function of a variety of cells under normal and diseased conditions. While several physiological, biochemical and molecular techniques have identified key players involved in different disease processes, phospholipases have also emerged as critical players in the pathogenesis of a number of different diseases including cancer and heart disease. In addition, phospholipases are also implicated in such conditions as brain disorder/injury, kidney and immune cell dysfunction.

Phospholipases in Health and Disease is a compilation of review articles dedicated to the study of the field with respect to biochemical and molecular mechanisms of normal and abnormal cell function. The wide range of area covered here is of interest to basic research scientists, clinicians and graduate students, who are engaged in studying pathophysiological basis of a variety of diseases. Furthermore, this book highlights the potential of the different phospholipases as therapeutic targets as well as part of prevention strategies. Twenty three articles in this book are organized in four sections that are designed to emphasize the most characterized forms of the phospholipases in mammalian cells. The first section discusses general aspect of phospholipases. Section two covers the role and function of phospholipase A in different pathophysiological conditions. The third section is focussed on phospholipase C which is believed to play a central role in transmembrane signaling. The final section covers phospholipase D which is present in a variety of different cells. The book illustrates that the activation of phospholipases is of fundamental importance in signal transduction affecting cell function. Overall, this book discusses the diverse mechanisms of phospholipase mediated signal transduction in different pathophysiological conditions and raises the possibility of specific forms of phospholipases serving as novel targets for drug development.