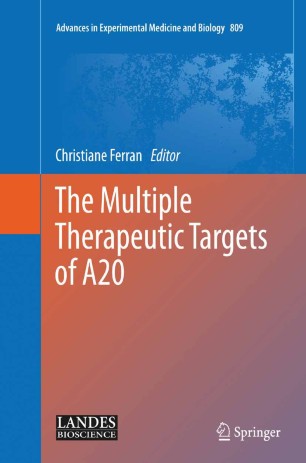 The Multiple Therapeutic Targets of A20

Part of the Advances in Experimental Medicine and Biology book series (AEMB, volume 809)

This book is meant to provide the most current knowledge regarding the mechanisms of action of A20, if its versatile functions and their validation in animal models of human disease and its promise as a diagnostic biomarker and therapeutic target.

Christiane Ferran, born in Beirut Lebanon, is Professor of Surgery at Harvard Medical School, Boston, Massachusetts, United States of America. She also holds an appointment as Staff Physician in the Division of Nephrology, Department of Medicine and as a Principal Research Investigator in the Division of Vascular Surgery at the Beth Israel Deaconess Medical Center (BIDMC). At BIDMC, Dr. Ferran is an active senior member of the Center for Vascular Biology Research, where she served as the chair of the Junior Faculty Mentoring Committee and of the Transplant Institute. She also chairs the Affinity Research Collaborative, an initiative aimed at fostering collaborative, interdisciplinary research program in the Department of Surgery. Main research interests include deciphering the physiologic molecular response to inflammation and how this response impacts disease pathophysiology, namely vascular diseases, allograft rejection, liver and islet regenerative processes and cellular metabolism. For the past two decades, this endeavor has mainly focused on the potent NF‑kB inhibitory protein, A20, for which she has continuously received external funding, starting in 1996 with a National Institutes of Health (NIH) funded RO1 aimed at studying the role of A20 in endothelial cell biology. Dr. Ferran is a member of numerous National and International Scientific Societies, including the American Society of Transplantation, the International Society of Transplantation, the American Society of Nephrology, the French Society of Nephrology and the American Society of Vascular Surgery. She has served as scientific reviewer on many National Institutes of Health (NIH), juvenile diabetes Research Foundation (JDRF) and Roche Organ Transplant Research Foundation (ROTRF) study sections.