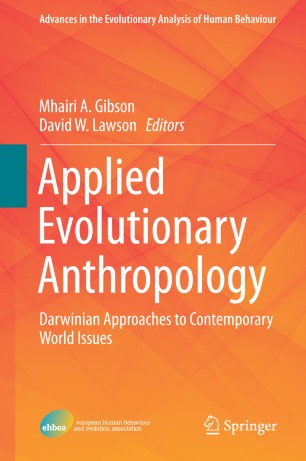 Part of the Advances in the Evolutionary Analysis of Human Behaviour book series (AEAHB, volume 1)

As a species, we are currently experiencing dramatic shifts in our lifestyle, family structure, health, and global contact. Evolutionary Anthropology provides a powerful theoretical framework to study such changes, revealing how current environments and legacies of past selection shape human diversity. This book is the first major review of the emerging field of Applied Evolutionary Anthropology bringing together the work of an international group of evolutionary scientists, addressing many of the major public health and social issues of this century. Through a series of case studies that span both rural and urban situations in Africa, Asia, Europe and South America, each chapter addresses topics such as natural resource management, health service delivery, population growth and the emergence of new family structures, dietary, and co-operative behaviours. The research presented identifies the great, largely untapped, potential that Applied Evolutionary Anthropology holds to guide the design, implementation and evaluation of effective social and public health policy. This book will be of interest to policy-makers and applied researchers, along with academics and students across the biological and social sciences.

Mhairi A. Gibson is a Senior Lecturer in Biological Anthropology at the University of Bristol, United Kingdom. Her research focuses on the application of evolutionary anthropology to health and social issues in the less developed world, combining anthropological and demographic methodologies with theoretical frameworks from evolutionary biology. She has undertaken fieldwork across Africa; over the last 13 years focusing on population changes experienced by one community in Southern Ethiopia. This research has addressed topics including the unforeseen consequences of development intervention and changing land tenure policies on the dynamics of reproduction and parental investment, as well as the impact of polygynous marriage and grandparental care on maternal and child health.

David W Lawson is a Research Fellow in Population Health at the London School of Hygiene and Tropical Medicine, United Kingdom. His research considers evolutionary models of parental investment and human family structure, including the dramatic decline to maladaptively low birth rates universally observed as populations undergo socioeconomic and cultural ‘modernization’. As a population health scientist, he is also broadly interested in the determinants of human wellbeing and its distribution within society, particularly with regard to food security and child health in sub-Saharan Africa. To this end, he works closely with Savannas Forever Tanzania, a non-governmental organization specializing in the collection and analysis of data for the evaluation of rural development projects in Northern Tanzania.