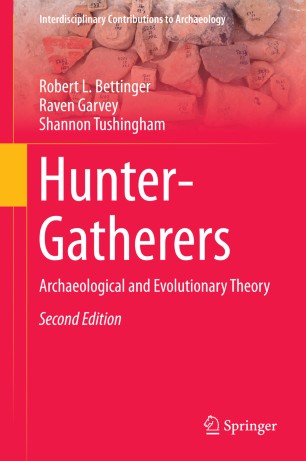 Hunter-gatherer research has played a historically central role in the development of anthropological and evolutionary theory. Today, research in this traditional and enduringly vital field blurs lines of distinction between archaeology and ethnology, and seeks instead to develop perspectives and theories broadly applicable to anthropology and its many subdisciplines.

In the groundbreaking first edition of Hunter-Gatherers: Archaeological and Evolutionary Theory (1991), Robert Bettinger presented an integrative perspective on hunter-gatherer research and advanced a theoretical approach compatible with both traditional anthropological and contemporary evolutionary theories.

Hunter-Gatherers remains a well-respected and much-cited text, now over 20 years since initial publication. Yet, as in other vibrant fields of study, the last two decades have seen important empirical and theoretical advances.  In this second edition of Hunter-Gatherers, co-authors Robert Bettinger, Raven Garvey, and Shannon Tushingham offer a revised and expanded version of the classic text, which includes a succinct and provocative critical synthesis of hunter-gatherer and evolutionary theory, from the Enlightenment to the present. New and expanded sections relate and react to recent developments—some of them the authors’ own—particularly in the realms of optimal foraging and cultural transmission theories.

An exceptionally informative and ambitious volume on cultural evolutionary theory, Hunter-Gatherers, second edition, is an essential addition to the libraries of anthropologists, archaeologists, and human ecologists alike.

Robert L. Bettinger is an archaeologist and professor of anthropology at the University of California, Davis. His research is grounded in quantitative ecological models of behavior and centers on hunter-gatherer adaptations to marginal environments including the North American Great Basin and parts of China, Siberia, and Argentina.  He has played a central role in the development of hunter-gatherer foraging theory, a contribution acknowledged by such awards as the Society for American Archaeology’s Award for Excellence in Archaeological Analysis (2007) and the Society for California Archaeology’s Martin A. Baumhoff Special Achievement Award ( 2007).

Raven Garvey is an assistant professor of anthropology at the University of Michigan and an assistant curator at the University of Michigan Museum of Anthropological Archaeology.  Her research in Patagonia explores interactions between prehistoric hunter-gatherers and their environments to better understand the relative importance of ecological and cultural factors in shaping behavioral and technological adaptations to changed conditions.

Shannon Tushingham is the Assistant Director of the Museum of Anthropology at Washington State University in Pullman, Washington. Her research program focuses on understanding evolutionary trends in human-environmental dynamics over the long term historical record and includes projects developed in collaboration with Native American descendant communities in the Pacific Northwest Coast and California. Guided by models from evolutionary ecology, this work involves examining some of the ideas and assumptions of interpretive frameworks that evaluate the productivity and potential of certain resources or environmental zones. She is also a specialist in the development of chemical residue extraction techniques, studies which are directed at understanding the ritual, medicinal and recreational use of psychoactive plants by worldwide human cultures.