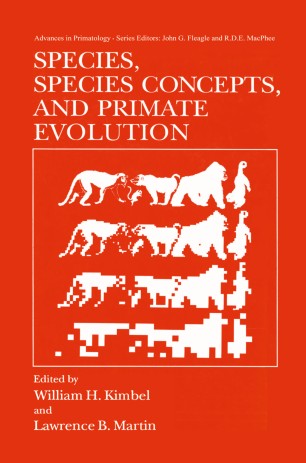 Part of the Advances in Primatology book series (AIPR)

A world of categones devmd of spirit waits for life to return. Saul Bellow, Humboldt's Gift The stock-in-trade of communicating hypotheses about the historical path of evolution is a graphical representation called a phylogenetic tree. In most such graphics, pairs of branches diverge from other branches, successively marching across abstract time toward the present. To each branch is tied a tag with a name, a binominal symbol that functions as does the name given to an individual human being. On phylogenetic trees the names symbolize species. What exactly do these names signify? What kind of information is communicated when we claim to have knowledge of the following types? "Tetonius mathewzi was ancestral to Pseudotetonius ambiguus. " "The sample of fossils attributed to Homo habzlis is too variable to contain only one species. " "Interbreeding populations of savanna baboons all belong to Papio anubis. " "Hylobates lar and H. pileatus interbreed in zones of geographic overlap. " While there is nearly universal agreement that the notion of the speczes is fundamental to our understanding of how evolution works, there is a very wide range of opinion on the conceptual content and meaning of such particular statements regarding species. This is because, oddly enough, evolutionary biolo­ gists are quite far from agreement on what a species is, how it attains this status, and what role it plays in evolution over the long term.