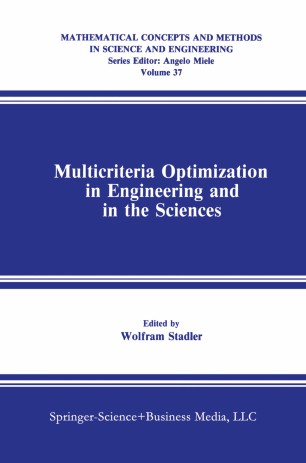 Multicriteria Optimization in Engineering and in the Sciences

Part of the Mathematical Concepts and Methods in Science and Engineering book series (MCSENG, volume 37)

We are rarely asked to. make decisions based on only one criterion; most often, decisions are based on several usually confticting, criteria. In nature, if the design of a system evolves to some final, optimal state, then it must include a balance for the interaction of the system with its surroundings­ certainly a design based on a variety of criteria. Furthermore, the diversity of nature's designs suggests an infinity of such optimal states. In another sense, decisions simultaneously optimize a finite number of criteria, while there is usually an infinity of optimal solutions. Multicriteria optimization provides the mathematical framework to accommodate these demands. Multicriteria optimization has its roots in mathematical economics, in particular, in consumer economics as considered by Edgeworth and Pareto. The critical question in an exchange economy concerns the "equilibrium point" at which each of N consumers has achieved the best possible deal for hirnself or herself. Ultimately, this is a collective decision in which any further gain by one consumer can occur only at the expense of at least one other consumer. Such an equilibrium concept was first introduced by Edgeworth in 1881 in his book on mathematical psychics. Today, such an optimum is variously called "Pareto optimum" (after the Italian-French welfare economist who continued and expanded Edgeworth's work), "effi. cient," "nondominated," and so on.