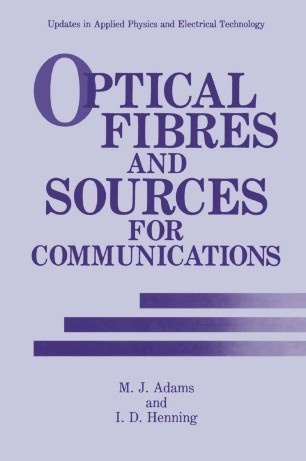 Optical Fibres and Sources for Communications

In the last few years the subject of optical cornmunications has moved rapidly from being a promising research area to a practical reality already being installed and carrying traffic in trunk networks in many countries. At the same time new applications for fibre technology are emerging and are placing new demands on the system components. In telecommunications there is a steady increase of interest in the use of fibres for undersea cables, in local area networks and wideband links, and a little further ahead the possibility of coherent communications systems. With an optical carrier bandwidth of 200 THz, today's maximum bit rates of the order of Gb s-l do not approach the limits of the medium, and questions about the ultimate limits of optical communications are already being asked. On a different front, the rapid advance of fibre sensors, previously drawing heavily on the communications technology, is becoming a major driving force in the development of fibres and other components. This picture of dramatic growth in optical technology gives rise to other phenomena. A profusion of small companies mushrooms to meet the demands of specific market areas, each such company formed around a nucleus of experienced personnel from the established research groups. Multi-­ nationals jostle for position in the optoelectronics marketplace and price wars develop as fibre costs fall. University groups expand with government and industrial funding in attempts to maintain long-term research options and produce trained personnei.