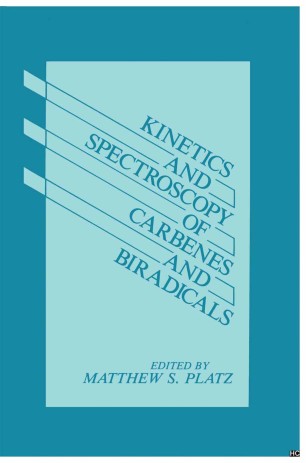 Kinetics and Spectroscopy of Carbenes and Biradicals

The development of mechanistic organic chemistry is filled with claims of short-lived reactive intermediates connecting starting material to product. In many ways this book represents a personal odyssey of the editor in this area of chemistry. I well remember my introduction to organic chemistry as an undergraduate working in the laboratories of Shelton Bank at SUNY Albany in the early 1970s, and the excitement and frustration attending the piecing together of the details of a reaction mechanism by working backwards from the stable products of the reaction. In those days the reaction and the reactive intermediates flew by too rapidly to permit direct observation. Thus it came as something of a revelation to me as a graduate student at Yale that it was possible to slow down a reaction and actually "see" such ephemeral species as carbenes and biradicals by spectroscopic methods, by generating them photochemically at cryogenic temperatures. In this monograph several chap­ ters are devoted to low-temperature studies. Dougherty has described the matrix EPR spectra of biradicals, which were pure conjecture only ten years ago. Michl and Arnold have described the matrix spectroscopy of cyciobutadiene, a molecule that has fascinated organic chemists for over a hundred years. They have shown that by using a combination of matrix spec­ troscopic methods it is possible to learn nearly as much about the structure of cyciobutadiene, the prototypical antiaromatic biradicaloid, as about that of a common shelf-stable reagent.