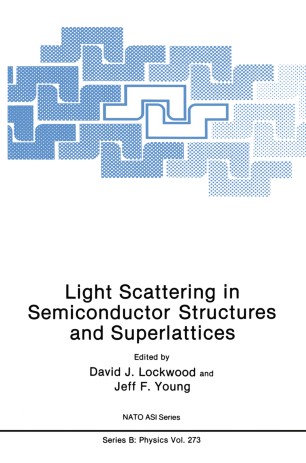 Just over 25 years ago the first laser-excited Raman spectrum of any crystal was obtained. In November 1964, Hobden and Russell reported the Raman spectrum of GaP and later, in June 1965, Russell published the Si spectrum. Then, in July 1965, the forerunner of a series of meetings on light scattering in solids was held in Paris. Laser Raman spectroscopy of semiconductors was at the forefront in new developments at this meeting. Similar meetings were held in 1968 (New York), 1971 (Paris) and 1975 (Campinas). Since then, and apart from the multidisciplinary biennial International Conference on Raman Spectroscopy there has been no special forum for experts in light scattering spectroscopy of semiconductors to meet and discuss latest developments. Meanwhile, technological advances in semiconductor growth have given rise to a veritable renaissance in the field of semiconductor physics. Light scattering spectroscopy has played a crucial role in the advancement of this field, providing valuable information about the electronic, vibrational and structural properties both of the host materials, and of heterogeneous composite structures. On entering a new decade, one in which technological advances in lithography promise to open even broader horirons for semiconductor physics, it seemed to us to be an ideal time to reflect on the achievements of the past decade, to be brought up to date on the current state-of-the-art, and to catch some glimpses of where the field might be headed in the 1990s.