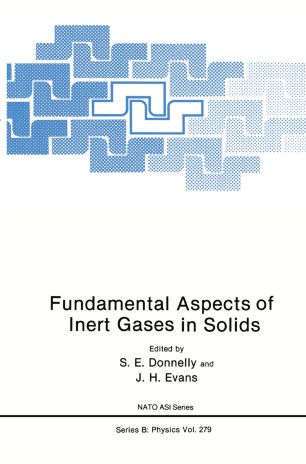 The NATO Advanced Research Workshop on Fundamental Aspects of Inert Gases in Solids, held at Bonas, France from 16-22 September 1990, was the fifth in a series of meetings that have been held in this topic area since 1979. The Consultants' Meeting in that year at Harwell on Rare Gas Behaviour in Metals and Ionic Solids was followed in 1982 by the Jiilich Inter­ national Symposium on Fundamental Aspects of Helium in Metals. Two smaller meetings have followed-a CECAM organised workshop on Helium Bubbles in Metals was held at Orsay, France in 1986 while in February 1989, a Topical Symposium on Noble Gases in Metals was held in Las Vegas as part of the large TMS/AIME Spring Meeting. As is well known, the dominating feature of inert gas atoms in most solids is their high heat of solution, leading in most situations to an essentially zero solubility and gas-atom precipita­ tion. In organising the workshop, one particular aim was to target the researchers in the field of inert-gas/solid interactions from three different areas--namely metals, tritides and nuclear fuels-in order to encourage and foster the cross-fertilisation of approaches and ideas. In these three material classes, the behaviour of inert gases in metals has probably been most studied, partly from technological considerations-the effects of helium production via (n, a) reac­ tions during neutron irradiation are of importance, particularly in a fusion reactor environ­ ment-and partly from a more fundamental viewpoint.