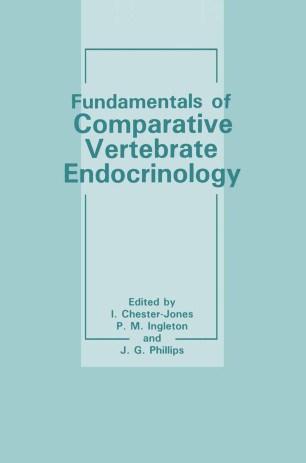 Endocrinology, as a discipline, was a late arrival in the corpus of established subjects. Its growth in recent years has been prodigious, extending from mor­ phology to molecular levels. Most of the major endocrine glands were noted by the early anatomists, although the adrenal glands were not described until 1563 by Bartholomaeus Eustachius (1520-1574). On the other hand, elucidation of the function of these glands was extremely slow. Key work by A. A. Berthold (1849), although overlooked at the time, showed that comb atrophy in castrated fowl was prevented by testis transplantation. The idea that glands produced substances reach­ ing the bloodstream directly and not via excretory ducts stemmed from Claude Bernard, who first used the term internal secretion in 1855. The clinical observa­ tions of Thomas Addison at Guy's Hospital-published as a monograph in 1855 entitled The Constitutional and Local Effects of Disease of the Suprarenal Capsules -were seminal. However, the stimulus of this early research did not bring imme­ diate widespread further investigations. Upon the discovery of secretin in 1902, Bayliss and Starling considered the term "internal secretion" to be clumsy, and the term "hormone" was coined (from OQ[!UW-1 excite or arouse) and it was first used by Starling in his Croonian of 1905.