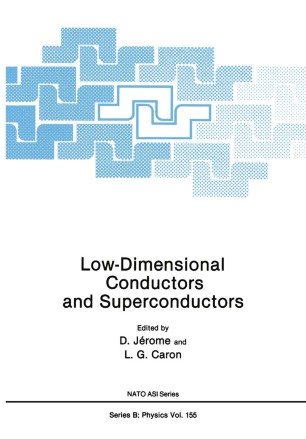 Research activities in low dimensional conductors have shown a rapid growth since 1972 and have led to the discovery of new and remarkable phy­ sical properties unique to both molecular and inorganic conductors exhibi­ ting one-dimensional transport behaviour. This NATO Institute was a conti­ nuation of aseries of NATO Advanced Study Institutes of Worshops which took place at regular intervals till 1979. This is the first time, however, that charge density wave transport and electronic properties of low dimen­ sional organic conductors are treated on an equal footing. The program of the Institute was framed by tutorial lectures in the theories and experiments of low dimensional conductors. The bulk of the course covered two series of low-dimensional mate­ rials with their respective properties. 1) The I-D inorganic conductors exhibiting the phenomena of sliding charge density waves, narrow band noise, memory effects, etc ..• 2) Low-dimensional crystallized organic conductors giving rise to various possibilities of ground states, spin-Peierls, spin density wave, Peierls, superconductivity and magnetic-field induced spin density wave, etc ... Since it has been established from the beginning that this Institute was to be devoted essentially to the Physics of Low Dimensional Conductors, only one main course summarized the progress in chemistry and material preparation.